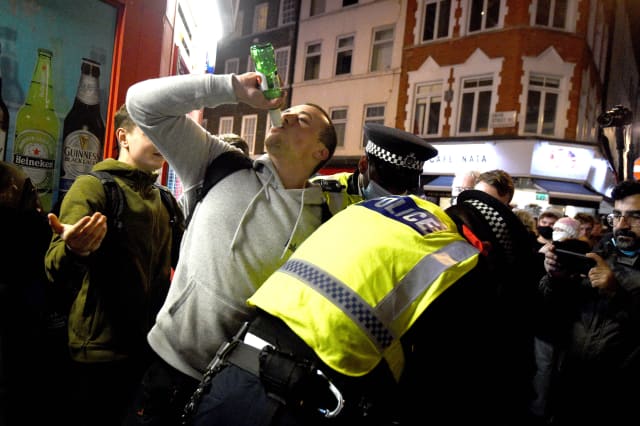 Police were attacked in Merseyside as revellers made the most of their final opportunity to go out to before England's four-week lockdown took effect.

From Thursday, pubs, restaurants and non-essential shops will again be forced to close their doors after the Commons voted by 516 to 38 – a Government majority of 478 – for the new restrictions.

The lockdown is intended to protect the NHS as the Government seeks to curb the spread of the coronavirus.

Merseyside Police said in a statement hundreds of people gathered at a bonfire on Meadow Crescent, Woodchurch, where officers had fireworks thrown at them after being called just before 9pm.

Chief inspector Gary O'Rourke said: ""Not only did police and fire patrols come under attack on their arrival, which could've had catastrophic results, but there was a blatant disregard for Covid-19 restrictions, with hundreds of people in attendance drinking alcohol, mixing with other households and ignoring social distancing.

"We will not tolerate this behaviour and are now looking at a number of lines of enquiry, including examining footage and speaking to witnesses, to ensure robust enforcement action is taken."

Meanwhile, Sussex Police have arrested two men and appealed for witnesses after another man suffered serious injuries in a fight involving around 20 people.

Officers were called to Montpelier Place, Brighton, at 10:15pm to find the victim, who was taken to Royal Sussex County Hospital for treatment, where he remains in a serious condition.

There was an increased police presence in the area while enquiries continued, with detective inspector Owen Radley urging "anyone who witnessed the assault to make contact with us immediately".

Meanwhile, chief constables in the north-west of the country said they would target the minority of the public who flouted rules by holding large gatherings, music events and parties.

And on social media Londoners reported high levels of traffic in the city as people attempted to leave before lockdown.