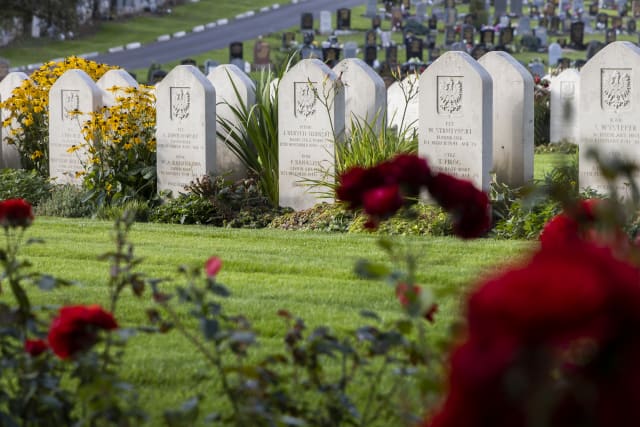 History enthusiasts are being given online tools to discover the stories behind local war graves and memorials as the country prepares to mark Remembrance Sunday under coronavirus lockdown.

With strict restrictions on travel, the Commonwealth War Graves Commission (CWGC) is encouraging the public to take a virtual exploration of the world war heritage on their doorstep.

In the UK there are more than 12,500 war grave sites maintained by CWGC, covering large memorials, churchyards and burial grounds.

A new website, www.cwgc.org/exploreGB, allows people to search for sites in their local area and read about their history and the people laid to rest there.

Below is a list of some the CWGC’s sites of commemoration.

People are warned travel to sites may not be advisable under coronavirus restrictions and are urged to follow local Covid-19 related rules.

The Allied war effort was international and diverse and at Chester (Blacon) Cemetery men and women from across the Commonwealth lie side by side with locals.

Among the 557 commemorated there include RAF airmen and Polish servicemen from the numerous Polish hospitals and camps that were in the area.

Standing proud over the Mersey, the CWGC’s Liverpool Naval Memorial commemorates over 1,400 men of the Merchant Navy who died serving with the Royal Navy during the Second World War.

More than 13,000 seamen agreed to serve with the Royal Navy during the war in various types of auxiliary vessels, in armed merchant cruisers, armed boarding vessels, cable ships, rescue tugs, and others on special service.

More than half of Polish war burials in Scotland can be found in the beautifully maintained grounds of the Perth (Jeanfield and Wellshill) Cemetery.

During the war this site was one of those selected for use as a Polish cemetery when Scotland became the base for the Polish Armed Forces in the UK. This is at the southern end of the site’s Jeanfield Division and contains over 350 burials.

Many who died in training or of illness lie at rest in this CWGC plot at St John’s Church in Sutton Veny.

Pictured is the grave of Sapper John Henry Thorpe of the Royal Engineers, who died aged 46 in 1921.

The solitary war grave of Sgt John Thwaite, a bomb aimer killed aged 22 in a 1943 training accident, lies among the fells of the Lake District, in the Newlands Valley.

Built after the First World War, and one of the last things departing men saw of England on D-Day, the CWGC’s Portsmouth Naval Memorial stands sentinel over the Solent.

It commemorates around 10,000 sailors of the First World War and almost 15,000 of the Second World War.

Cottesmore Aerodrome, a Royal Air Force station, opened in March 1939 and was an operational training school.

Others buried there were from what was Southern Rhodesia, Newfoundland, India, one who was domiciled in Chile, and a citizen of the United States who was serving in the Royal Canadian Air Force.

The depot for the Royal Naval Patrol Service was at Lowestoft during the Second World War, with an objective to maintain wartime patrols and safeguard the coasts of Britain.

More than 2,000 men who have no grave other than the sea are remembered on this memorial.

One of only eight places in the country where more than 1,000 war dead are buried in one place.

Many of those commemorated at this Cambridge site served in Bomber Command and the average age of the men here is just 22 years old.

Plymouth was an important naval station during both of the world wars.

The port city has served as a gateway to the world across the sea, and its global history can be seen in the national emblems on the Commonwealth war graves in its Efford Cemetery.

The names of 53 Indian First World War casualties, cremated in accordance with their faith, line this CWGC memorial on the hills above Brighton.

These soldiers had all been transferred to hospital in Brighton after fighting on the Western Front in 1914 or 1915.

The inscription on the memorial, which is written in Hindi, Punjabi and English, reads: “In honour of these soldiers of the Indian Army whose mortal remains were committed to fire.”

How will the new border controls work?