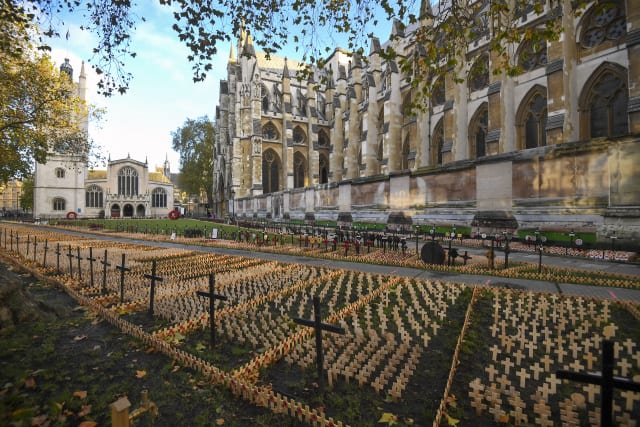 The Duchess of Cornwall has paid tribute to Britain’s war dead by placing a cross in Westminster Abbey’s Field of Remembrance.

Camilla honoured the servicemen and women who sacrificed their lives for their country, and stood in solemn silence as the Last Post was played.

She carried out the public engagement in central London ahead of Armistice Day next week – and one day before England enters a second national lockdown.

Only a small number of socially distanced veterans attended the event this year as the nation battles the Covid-19 outbreak.

The duchess, dressed in black, was shown the rows of thousands of small pale wooden crosses which are planted every year in the grounds of the Abbey in memory of the fallen.

Each one bears the name of a lost loved one, a poppy and often a message of commemoration.

The Dean of Westminster, the Very Reverend David Hoyle, offered prayers during the ceremony, as Camilla stood in front of two large wooden crosses from the graves of unknown British soldiers from the First and Second World Wars, before laying her own cross of remembrance.

She listened to the recital of the traditional Exhortation of Remembrance – the well-known moving extract from Robert Laurence Binyon’s 1914 poem For The Fallen, which features the words “At the going down of the sun and in the morning, we will remember them.”

It was followed by a two-minute silence.

The Field of Remembrance – in its 92nd year – is organised by the Poppy Factory and has been held in the grounds of the Abbey since November 1928 to commemorate all those who have lost their lives in the armed forces.

Camilla reviewed some of the memorial plots for regimental and other associations.

She was escorted by the Poppy Factory’s president, Surgeon Rear Admiral Lionel Jarvis.

The duchess has been patron of the organisation, which supports veterans with mental or physical health conditions back into work, since 2013.

For many years, the royal visit to the Field of Remembrance was performed by the Queen Mother.