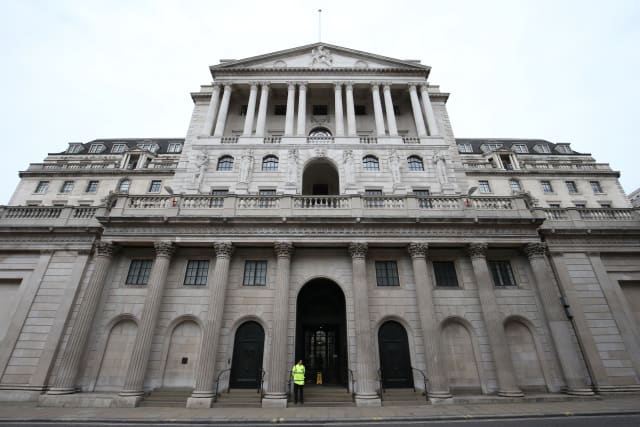 The Bank of England is expected to launch another £100 billion of economy-boosting action on Thursday amid fears that the new lockdown in England will leave the UK on the brink of a double-dip recession.

Economists are widely expecting the Bank to unleash more quantitative easing (QE), taking its mammoth bond-buying programme up to £845 billion, as it looks to shore up the economy in the face of a second wave of the pandemic.

It is set to slash economic forecasts in the wake of the new national lockdown across England and warned it will be longer before the economy recovers to pre-Covid 19 levels.

But the Bank is expected to keep interest rates at 0.1% and hold off from taking them below zero for the first time in its history.

The decision and quarterly set of forecasts come as experts warned that the latest restrictions will send gross domestic product (GDP) tumbling this month.

With a fall in GDP on the horizon for the final quarter of 2020, the economy could be led into a possible double-dip recession by early next year.

The Bank forecast in its last Monetary Policy Report in August that the economy would shrink by 9.5% this year, following government action aimed at protecting the economy.

This is now looking optimistic in view of the latest restrictions.

Howard Archer, chief UK economist at the EY Item Club, said: “It now looks highly probable that the UK economy will contract by well over 10% in 2020 given the imminent national lockdown in England, while the current consensus forecast for growth in 2021 is around 6% and it looks likely to come down further amid the increasing downside risks to the outlook.”

But the hit from lockdown 2.0 will not be as severe as the record-breaking 20% contraction suffered in April, given that education remains open and many businesses have already adapted their operations.

Andrew Goodwin, chief UK economist at Oxford Economics, said this month’s lockdown will be “less economically damaging than the first one”.

He is predicting GDP will fall 3% in the fourth quarter.

Chancellor Rishi Sunak’s move to extend furlough will also help with unemployment, but there are fears that this will only put off the inevitable and the Bank is likely to repeat warnings over a rising UK jobless rate.

It is thought the Bank may look to increase the pace at which it buys bonds under the QE programme to help counter the impact of lockdown.

But experts are not expecting policymakers on the nine-strong Monetary Policy Committee (MPC) to deploy negative interest rates yet.

The Bank is still waiting for responses from lenders on their readiness for sub-zero rates and has already said it is likely to be months away from being a valid monetary policy tool.

Former MPC member David Miles – now professor of financial economics at Imperial College Business School – joined those not in favour of negative rates, saying he is “sceptical” over whether they would be effective in the UK.

“The message that’s coming back very strongly from financial institutions and banks is ‘This is messy, difficult and will make life hard for us’,” he said.

“There’s mixed evidence inside the Bank of England about how effective negative rates would be, so on balance you probably couldn’t get a majority on the committee to vote for it, at least not now,” he added.