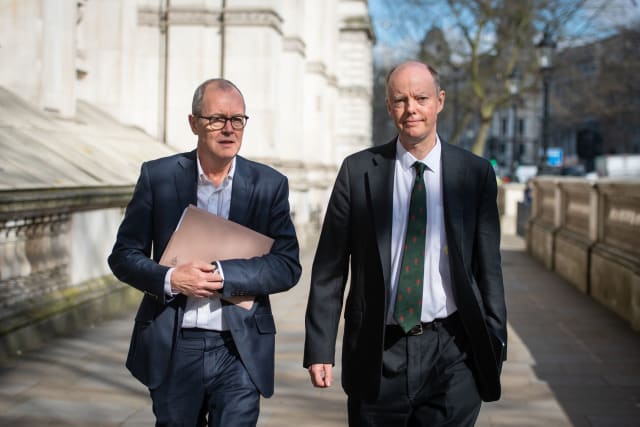 Government advisers have been probed on the data used to argue the case for a new national lockdown in England.

Chief scientific adviser Sir Patrick Vallance and chief medical officer for England Professor Chris Whitty were challenged about the evidence behind the lockdown when they appeared before MPs – particularly the use of modelling scenarios which suggested there could be as many as 4,000 deaths a day.

Labour MP Graham Stringer suggested to Sir Patrick that he had “frightened a lot of people around the country”.

Sir Patrick told the Science and Technology Committee: “I think I positioned that – and if that didn’t come across then I regret that – but I positioned that as a scenario from a couple of weeks ago, based on an assumption to try and get a new reasonable worst-case scenario.”

The experts stressed the importance of six-week projections, rather than the longer-term scenarios.

Sir Patrick said the six-week forward projection suggested the number of people in hospital would pass the first wave “towards the end of November”.

And the number of deaths would equal the first wave “somewhere in mid-December”.

But that projection was based on nothing changing, so did not take into account the expected impact of the lockdown due to come into force in England on Thursday.

Prof Whitty said that reaching the same levels seen during the peak in April is an “entirely realistic situation”.

He added: “I think there has been some rather overblown rhetoric on this.

“People can take different projections if they wish.

“But getting to the stage we got to in April – and if we do nothing, carrying on up from there – is entirely realistic.”

Sir Patrick apologised if there was confusion about the different scenarios and projections used at the press conference.

He told MPs: “If this is confusing then I apologise for that, but the model projections of the six weeks were the things that I was clear that ‘that’s what you need to concentrate on’, those are the things that you can have more reliability on in terms of the numbers.

Sir Patrick accepted longer-term modelling, beyond around six weeks, can see some “uncertainty” creep in.

The pair were asked by Tory MP Aaron Bell whether the “avalanche of data” presented on Saturday was “an appropriate way” to make their case to the nation.

“That would always be an aim and clearly some of those slides were quite complicated, and it is a very complicated thing.”

New data from the Covid Symptom Tracker app, which is run by King’s College London (KCL), suggests there has been a slight drop in new Covid-19 infections across England, Wales and Scotland.

Professor Tim Spector, who leads the app study, said: “The Zoe CSS (Covid Symptom Study) app survey continues to show a plateauing and slight
fall in new cases in England, Wales and Scotland with an R of 1.0.”

But new data from the MRC Biostatistics Unit at the University of Cambridge puts the R number above one in most regions.

The group estimates that the daily number of new infections each day across England is 77,600.

The scientists predict the number of deaths each day is likely to be between 380 and 710 by November 14.

Meanwhile, the Government has published the data behind the slides used at the Downing Street press conference which have drawn much attention.

The documents show the different assumptions made by the models – which is why their findings have come to different conclusions.

Sir Patrick said that a “package of measures” were needed to get the R rate below one.

When asked about religious gatherings and outdoor sports, he told MPs: “The danger in trying to pick apart each one, and when you get down to the ones towards a lower level where you might say, ‘Well, this doesn’t make much of an impact on its own’, is that you keep cutting things off and then you end up with a suboptimal package.”