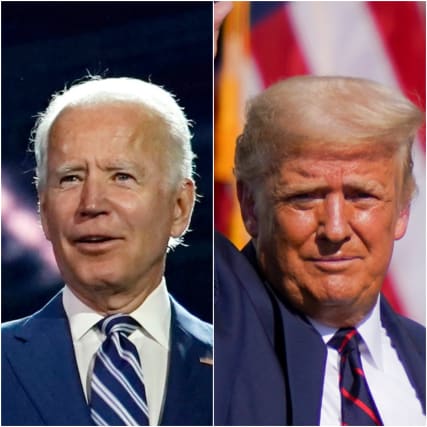 Americans are anxiously awaiting the result of a presidential election overshadowed by the coronavirus pandemic after a divisive campaign between Donald Trump and Joe Biden.

The first polls closed in parts of Indiana and Kentucky at 11pm UK time on Tuesday but voting will continue for several hours more as results in key battleground states decide who will take the White House.

The Republican incumbent, Mr Trump said he believes he has a “very solid chance at winning”, while his Democratic challenger cautiously said he remains “hopeful”.

Mr Biden, a former vice-president, has painted the election as the “battle for the soul” of the nation, saying democracy itself is at stake, while Mr Trump has reprised his “make America great again” mantra.

Both men have clashed over the Covid-19 response, as the nation reels from more than 230,000 coronavirus deaths in the US and millions more having lost their jobs.

Mr Trump has sought to downplay the pandemic’s effect, saying the nation is “rounding the corner”, while his opponent has accused the president of having surrendered to the disease.

A noticeably hoarse Mr Trump, spoke to Fox News by phone to speak up his “very solid” odds, predicting he could win with a larger margin in electoral college votes than in 2016 against Hillary Clinton.

“I’m superstitious about predicting what an outcome’s gonna be until it happens … but I’m hopeful,” he added.

National polls have consistently put Mr Biden ahead, but the race has been close in the battleground states, including Florida, Georgia and Arizona, which hold the keys to the White House.

Each state gets a number of electoral college votes roughly in line with its population, and they largely hand them all to the winner in that state. With 538 up for grabs across the States, 270 is the key number to win the presidency.

But the election night itself may not reveal the definite answer many want, with Mr Trump having refused to commit to a peaceful transition of power and having warned of a “rigged election”.

The president has invited hundreds of supporters to an election party inside the White House, while Mr Biden will await the results in his hometown of Wilmington, Delaware.