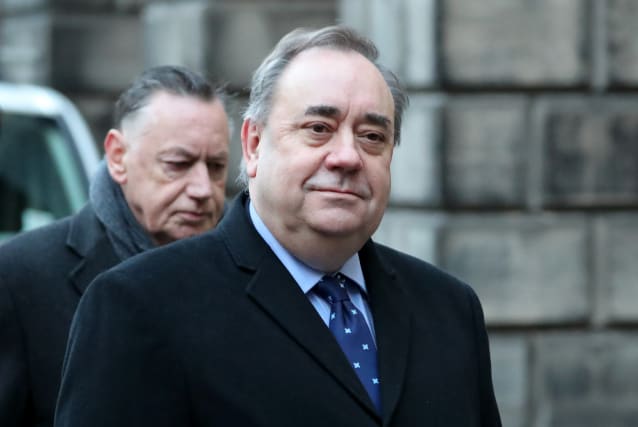 Alex Salmond’s payout over an unlawful investigation into claims of sexual harassment was so high because of the Scottish Government’s delay in conceding the case, MSPs have heard.

Evidence of the botched handling of the complaints that undermined the Scottish Government’s legal defence was discovered in October 2018, according to its former legal director Paul Cackette.

But it was not until the following January that the Scottish Government conceded the case to the former first minister at a cost of £512,250.

The delay in conceding the case, along with Mr Salmond requesting certain documents – known in Scots law as commission and diligence – “certainly added to the expense”, Mr Cackette said.

Excluding staff time, the total legal fees and expenses incurred as a result of the botched investigation totalled approximately £630,000.

Lord Pentland ruled at the Court of Session in January 2019 that prior communication between investigating officer Judith MacKinnon and two women who came forward with complaints meant the inquiry was “procedurally unfair” and “tainted with apparent bias”.

Ms MacKinnon, in her evidence to the Committee on the Scottish Government Handling of Harassment Complaints last week, claimed she was “always upfront” about her contact with the two women.

She also said she took legal advice from an unnamed government employment lawyer who was connected to the judicial review at an early stage.

During Tuesday’s evidence session, Mr Cackette said he only learned of this “potentially serious issue” in late October 2018 after a search for documents once questions were raised by Mr Salmond’s lawyers.

He said: “It was clear from my first becoming aware of it that this was potentially a significant problem.”

The procedure for formal complaints against former Scottish Government ministers states the investigating officer “will have had no prior involvement with any aspect of the matter being raised”.

Committee member Murdo Fraser said “something had gone catastrophically wrong” and asked why it then took until January 2019 for the Scottish Government to concede the case.

Mr Cackette said: “It took time to work out what this actually really meant.

“It wasn’t really in that sense a slam-dunk moment.”

Responding to an accusation of Scottish Government “incompetence” from SNP MSP and committee member Angela Constance, he said: “Whatever adjective you chose to describe it, it certainly seemed to me to be very difficult to say – given the way events had panned out – that we were wrong to have the high level of expenditures.”

He added it was “proper to defend” the accusation the investigation was unlawful.

Challenged by Jackie Baillie about the prospect of success, he said: “It was only at the end, leading up to the decision on January 2, that it became clear that it would be improper to defend.”

After Ms MacKinnon’s evidence last week in which she revealed the same complaints procedure is still in place, Liberal Democrat MSP Alex Cole-Hamilton asked whether that “exposes the government to further legal risk”.

Mr Cackette said the wording itself is not “necessarily wrong in all circumstances”.

“If anybody were to come forward now, obviously we have learned that we wouldn’t allow the situation to arise as it had in this particular case,” he said.

After the evidence session, Ms Bailie said: “Despite repeated warnings that the Scottish Government’s own actions had compromised their case, the government persisted with the judicial review at great expense to the Scottish taxpayer.

“The Permanent Secretary (Leslie Evans) drove the process from start to finish and appears to have discarded professional judgment in pursuing the judicial review when she knew the prospects of success were minimal.

“This is completely arrogant and a waste of taxpayers’ money.

“This whole episode should shame the Scottish Government.”