Protesters clash with police in Washington after two men detained 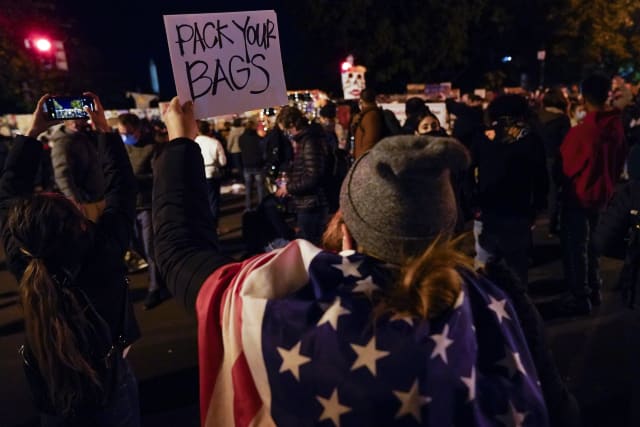 Demonstrators squared off with officers on Black Lives Matter Plaza Northwest, near to the White House, after the men were detained outside the Labourers’ International Union building.

It was not clear why they were being held.

Officers on bikes formed a barrier between the men and the crowd as protesters tried to force themselves through.

Chants of “f*** the police” and “no justice, no peace” broke out while demonstrators called on police to release the men.

Some protestors kicked police bicycles while others called for the crowd to not allow them to take away the two detainees. Officers escorted the detained men out through the barrier of bikes.

The incident appeared to be the first instance of significant tension on a night when many predicted major unrest.

Buildings in downtown DC are boarded up while the White House is protected behind a fence.

Earlier, there had been a relaxed atmosphere on the plaza, with supporters of Donald Trump and Joe Biden mixing without any issues.

The only sign of tension came after a preacher obstructed an anti-Trump flag being carried along the street.

As temperatures dropped, some of those gathered huddled around a projector showing TV news bringing live updates from across the US.

“I’ve been worried for the last year,” she told the PA news agency. “I’ve been sick for the last four years of what he’s done to this country. It would only get worse – we will become a fascist country if he gets elected.”