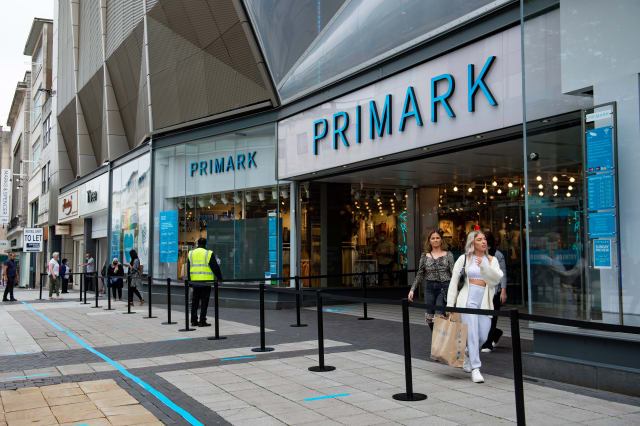 Bosses at Primark owner Associated British Foods (ABF) have said the retailer’s high street stores could extend their opening hours for Christmas shoppers when they can open their doors again.

“We are absolutely looking at longer opening hours,” he said.

“Safety will be paramount and our teams have worked very well to deal with demand and ensure queue management so will continue to work hard to adapt to demand ahead of Christmas.

“We’ve seen very strong sales over the past few days and would expect similar today and tomorrow.”

His comments came as ABF reported lower profits for the past financial year in its latest stock market update.

The group said it will be affected by recently announced lockdown restrictions across Europe, which will see its UK stores shut their doors temporarily from Thursday until at least December 2.

ABF said the new restrictions will have a “significant” impact on Primark, although it still expects sales and profits at the retailer during the current financial year to be higher.

In a separate update on Monday, it warned that the latest closures are expected to result in a £375 million loss of sales ahead of the key Christmas period.

On Tuesday, it told investors it lost around £800 million from Primark during the three-month closure from March, as it continued to pay suppliers.

Nevertheless, it reported that sales gradually recovered after the closure period, with sales of children’s clothes, leisurewear and nightwear surpassing pre-Covid levels.

ABF’s retail business saw sales for the year slump 24% to £5.9 billion, although the group reported an 11% fall in revenues to £13.9 billion as it hailed solid performances in its grocery, sugar and ingredients arms.

ABF reported that operating profit slid by 40% to £810 million for the year to September 12 after being weighed down by lower revenues.

The grocery division reported “another year of strong profit” with supermarket sales jumpig in the latter half of the year as shoppers stocked up on groceries.

It hailed tea business Twining Ovaltine as an “outstanding growth story” after strong shopper demand for tea during lockdown helped to buoy profits.

The group’s Silver Spoon, Jordan’s, Dorset Cereals, Ryvita and AB World Foods business all performed strongly in the second half of the year, benefiting from increased demand for store-cupboard essentials.

“We have a host of brands that people know they can trust and they have performed well this year,” he said.

“We’ve also seen strong sales of home baking products among younger customers, and that is an area which has been really solid for us.”

ABF chief executive George Weston said: “I am proud of how our people have responded to the many challenges presented by Covid-19.

“Throughout, we have provided safe, nutritious food under the most extraordinary conditions, proving the value and resilience of our supply chains.

“Following a three-month closure, Primark delivered a robust performance, receiving an overwhelmingly positive response when it safely welcomed customers back to its stores.

“Uncertainty about temporary store closures in the short term remains, but sales since reopening to the year-end of £2 billion demonstrate the relevance and appeal of our value-for-money offering.”