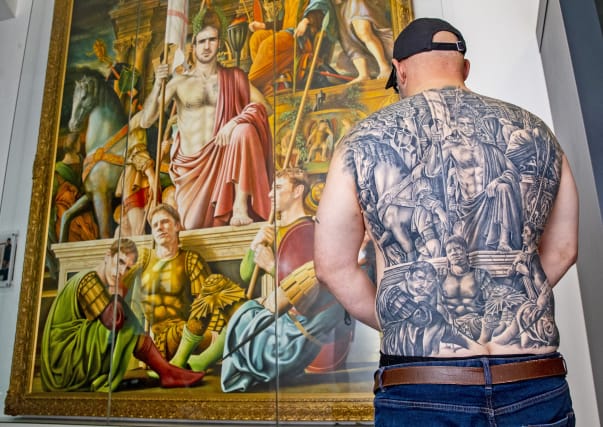 A postman has unveiled the ultimate football tattoo, three years after first going under the needle in homage to Eric Cantona.

Manchester United fan Jamie Wright has had a full-back tattoo recreating The Art Of The Game painting, which famously features the charismatic Frenchman in a reimagining of Piero della Francesca’s 15th century painting The Resurrection.

The original oil-on-canvas painting is on display at the National Football Museum, where Mr Wright unveiled the finished copy on his back.

Originally painted in a Deansgate bar by Mancunian artist Michael Browne, its subject Cantona agreed to pose for the renaissance-style piece before promising to purchase the finished item.

The artist draws a parallel between the biblical event and Cantona’s return from an eight-month ban following the notorious “kung-fu kick” incident at Selhurst Park.

Mr Wright said: “Eric, from a united fan’s perspective, is an icon.

“It’s something I’ve thought about for years and years.

“This is going to be on me for life.

“I still get compliments off other fans, not just United fans, City fans, Liverpool fans.

“Don’t think I’ve had a Leeds one yet and I don’t expect to!”

Cantona has also commented on Instagram his approval for the tattoo.

Mr Wright added: “I can’t put that into words. It was emotional. I’ve watched him play. It meant a lot.”

The tattooist, Jonny Firth, from Sorry Mum Studio, said: “It was a very, very fun piece to do.”