Johnson predicts ‘light ahead’ after coronavirus gloom of November 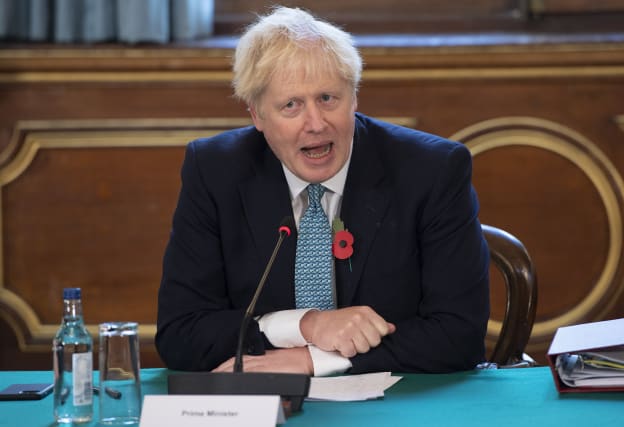 Boris Johnson promised there are “better days before us” in the battle against coronavirus, as England prepared for a second lockdown.

The trial of rapid coronavirus tests across Liverpool and the development of new treatments offered hope, the Prime Minister told his Cabinet.

There is unease on the Tory benches about the lockdown, which will begin on Thursday and last until December 2, but Mr Johnson again insisted it was necessary.

The Prime Minister said the R number – the reproduction rate of the virus – was “only just above 1” and the lockdown would bring it back below that threshold.

He acknowledged that “we don’t want to be doing things to repress liberty, we don’t want to do anything to damage our economy” but “we would see fatalities running in the thousands if nothing was done”.

However, the rapid tests could be “possibly decisive” in defeating the virus and there were also better drugs and the prospect of a vaccine.

“Amid the uncertain gloom of November, I see light ahead and I’m absolutely certain that we will have better days before us,” he told ministers.

“Let’s all work flat-out as a Government to repay the confidence of the people who are doing the right thing and following the latest autumn measures.”

Mr Johnson’s efforts to win public support were not helped by two Cabinet ministers appearing confused over the restrictions which will come in on Thursday.

Communities Secretary Robert Jenrick suggested that an entire household could meet up with a friend, before then contradicting himself.

And Chancellor of the Duchy of Lancaster Michael Gove apologised after incorrectly indicating that people could play a round of golf or game of tennis with a friend.

The official guidance states that people in England can exercise or visit outdoor public places either with their household or one person from another household – although children under school-age with a parent will not count towards the limit on two people meeting outside.

On BBC Breakfast, Mr Jenrick was asked if a family could go for a walk with a friend.

However, when presenter Louise Minchin pressed him, asking whether this applied to four people and one person, Mr Jenrick said: “Yes, so you can go out in your own household, or with one other person.”

Mr Gove admitted his mistake after wrongly suggesting during a question and answer session with constituents that people would be able to play singles tennis or golf in pairs during the impending lockdown.

On Tuesday morning, Mr Gove said: “My apologies, I got this wrong.

“Outdoor leisure facilities including tennis courts and golf courses will be closed from Thursday.”

England’s lockdown will end on December 2, with the Government hoping to reintroduce a localised tiered system of restrictions.

Mr Johnson hopes that a mass testing campaign, using equipment which can deliver a result in a matter of minutes, could be a route out of the coronavirus crisis.

A two-week pilot scheme in Liverpool will see half a million people offered regular testing from Friday, with 2,000 military personnel helping with the logistics.

If the pilot is a success, millions of the tests could be distributed by Christmas, Mr Johnson said.

Mayor of Liverpool Joe Anderson urged residents to get tested “for our city, our NHS, our people and our economy”.

The aim is to use new rapid turnaround tests – alongside existing swab tests, and Lamp (loop-mediated isothermal amplification) technology for NHS staff – to find asymptomatic cases in order to help prevent and reduce transmission in the community.

Chief scientific adviser Sir Patrick Vallance and chief medical officer for England Professor Chris Whitty are due to face questions from MPs on Tuesday afternoon when they appear before the Science and Technology Committee.

The experts will be challenged about the case for lockdown, but the latest statistics showed a rising death toll.

A total of 978 deaths registered in England and Wales in the week ending October 23 mentioned Covid-19 on the death certificate, according to the Office for National Statistics, the highest since June 12 and a 46% increase on last week’s figure.

As part of the package of support announced alongside the lockdown, the Government has extended the furlough scheme until December.

Scotland’s leader Nicola Sturgeon wants to know if that support could be extended if she decides on a lockdown which goes beyond England’s December 2 deadline.

Mr Johnson said on Monday that “if other parts of the UK decide to go into measures which require the furlough scheme then of course it’s available to them” and “that applies not just now but of course in the future as well”.

But Mr Jenrick told Sky News on Tuesday that any extension beyond December is “a decision the Chancellor will have to make at the time”.

Welsh First Minister Mark Drakeford said: “We take the PM at his word and would expect him to instruct any Chancellor in a Government led by him to do the same.”