Guidance published for Remembrance Sunday events ahead of second lockdown 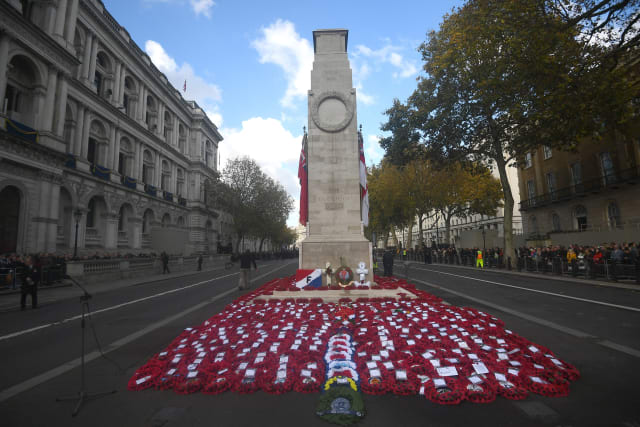 Guidelines have been published on how local Remembrance Sunday activities can take place, ahead of tough new coronavirus restrictions for England.

Only limited communal singing is permitted, events should be held outside to reduce transmission and attendees must be socially distanced at all times, according to the Government guidance.

It sets out preparations for local authorities, with England due to go into a second national lockdown from Thursday.

Local authorities, faith leaders and members of the Royal British Legion are permitted to organise outdoor events to safely mark November 8 at a public war memorial or cenotaph.

But Remembrance events should be short and focussed on wreath-laying, while a march past or parade can take place if attendees are socially distanced.

Those legally permitted to attend events as participants include those attending as part of their work, such as local councillors and faith leaders, members of the armed forces and veterans.

While people are legally permitted to stop and watch as spectators, reasonable steps should be taken to “minimise wider public viewing”, according to the guidance.

Members of the public are only permitted to attend the event with their own household or support bubble, or individually with one other person from outside their household.

Guidance states that limited communal singing – involving the national anthem and one additional song – is permitted outside, providing additional mitigations are put in place.

These include songs being a few minutes or less, keeping two metres between attendees and regular cleaning of surrounding surfaces that are touched.

The Prime Minister’s official spokesman confirmed on Monday that a national ceremony at the Cenotaph in London will take place.

The spokesman said: “We are certainly not cancelling Remembrance Sunday events but we must be mindful of the risks such events pose, especially to veterans who are often elderly.”

This year’s event will be on a much smaller scale and ministers had already urged people to stay away from the Cenotaph and watch the service at home on TV.

Regional councils in England have also adjusted their plans for this year’s commemorations, with the majority encouraging people to observe the traditional two-minute silence from home.