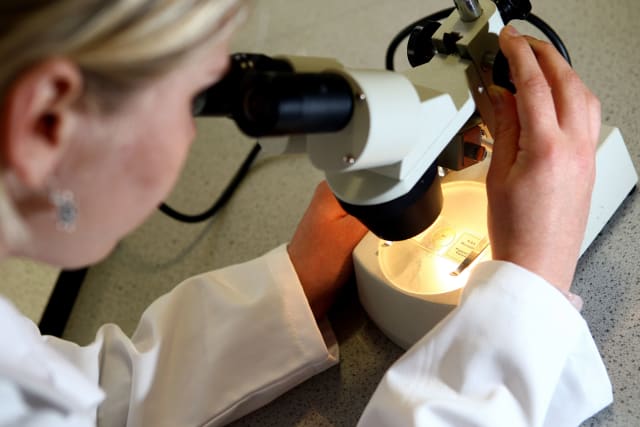 A study of fossilised faeces from 200 million years ago has detailed food webs in the ancient shallow seas around Bristol.

Researchers used a new scanning technology to look inside the ancient faeces, known as coprolites, taken from the Rhaetian bone bed near Chipping Sodbury in south Gloucestershire.

They discovered an array of food remains contained in the coprolites, which are dated at 205 million years ago.

Marie Cueille, a visiting student at the University of Bristol’s School of Earth Sciences, said: “The ancient fishes and sharks of the Rhaetian seas were nearly all carnivores.

“Their coprolites contain scales, teeth, and bones, and these tell us who was eating whom.

“In fact, all the fish seem to have been snapping at each other, although the general rule of the sea probably applied: if it’s smaller than you, eat it.”

The CT scans of one tiny coprolite, measuring a centimetre or so in length, contained only three bones – the highly tuberculated skull bone of another fish, and two vertebrae from the tail of a small marine reptile called Pachystropheus.

Researchers believe the shark behind the coprolite “snapped” at a fish, swallowing large bits of bone at the same time, before taking a chunk of a Pachystropheus tail as the creature swam by.

Professor Mike Benton, who co-supervised the study, said: “What amazed us was that the bones and scales inside the coprolites were almost completely undamaged.

“Today, most predators that swallow their prey whole, such as sharks, crocodiles or killer whales, have powerful stomach acids that dissolve the bone away.

“These ancient fishes must have had a painful time passing their faeces which were absolutely bristling with relatively large chunks of bone.”