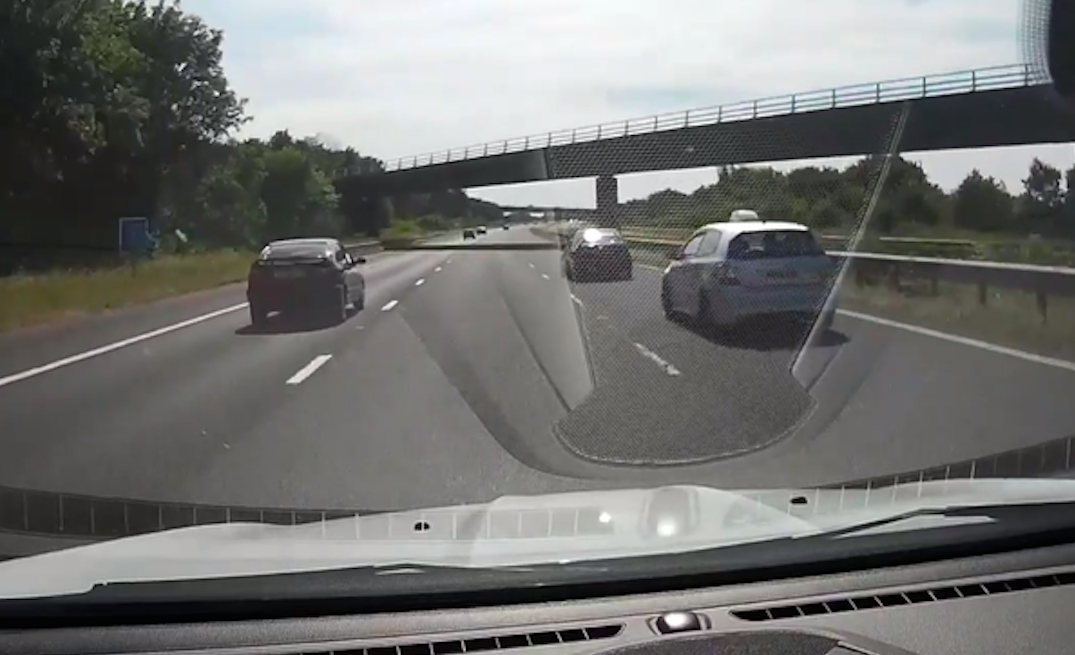 A father who caused the death of his three-year-old son when he crashed his car during a motorway race has been jailed for four and a half years.

Israr Muhammed, 41, was travelling at more than 100 mph and less than 10 metres from another Honda Civic despite having a family of five in the car.

His car had a blow-out and he lost control, with the car spinning across three lanes and crashing off the M62 and into an embankment of trees, Humberside Police said.

His three-year-old son, Say Han Ali, whose car seat was not properly secured, was killed in the crash.

His wife Safeena Ali was in a coma for several months after the incident on 1 July 2018, having suffered a brain injury.

His daughter, who was 11 at the time, suffered life-changing injuries to her face.

Muhammed, from Batley, West Yorkshire, had been racing Adam Molloy, 29, of Normanton near Wakefield.

He was also sentenced to four and a half years in prison.

Hull Crown Court heard the pair drove "like idiots" in the outside lane of the M62 in East Yorkshire.

Sentencing the pair on Monday, Judge David Tremberg said Muhammed had been seen driving "in an erratic and unsafe manner" for many miles before the accident, failing to give way at a roundabout and weaving in and out of traffic.

He said Muhammed claimed Molloy – who worked as a HGV driver – began "tailgating" him.

Judge Tremberg said: "Expert assessment of the footage reveals that each of you was travelling in excess of 100mph and there were roughly 10 metres between your cars as you sped along.

"Other drivers formed the impression that you were racing and driving like idiots.

"I'm satisfied that you, Israr Muhammed, had a whole array of safe choices you could have made to avoid rising to the bait.

"You, Adam Molloy, elected not to give evidence at the trial. That's not surprising because no-one was forcing you to drive as you did and you could not have had an answer to why you were driving in such an aggressive and intimidating fashion at such a high speed and so close to the car ahead.

"The fact that you hold an HGV licence makes your incredibly foolhardy and gratuitous behaviour even more mystifying."

Both men were also banned from driving for six years and three months.

The court heard that both drivers were returning from a trip to the coast with their families when they began the "competitive driving" along the motorway, near its junction with the M18, which was captured on another driver's dashcam.

The court heard there was a "latent defect" to one of the tyres on Muhammed's car, causing a "catastrophic failure" that was increased by the high speeds.

The court heard that Molloy avoided the collision and fled the scene.

The judge said: "But for the presence of the dashcam footage, that cowardly act of self-preservation would almost certainly have allowed you to escape justice."

The court heard that Say Han's car seat was not safely secured in the car and Muhammed's daughter and eight-year-old son were unrestrained. Muhammed was also uninsured.

Mrs Ali, who suffered a severe traumatic brain injury, spent many months in hospital in a coma, while her daughter sustained multiple facial injuries, including a fracture to her left eye socket. Their older son was not badly injured.

In a victim impact statement, Mrs Ali urged the judge not to jail her husband.

Andrew Semple, in mitigation for Muhammed, described him as a "loving family man, a hard worker".

Speaking after the sentencing, Sergeant Rob Mazingham, of Humberside Police, said: "I have been involved in many road traffic collisions, however the death of a child in such awful circumstances can only be described as a tragic loss of life."