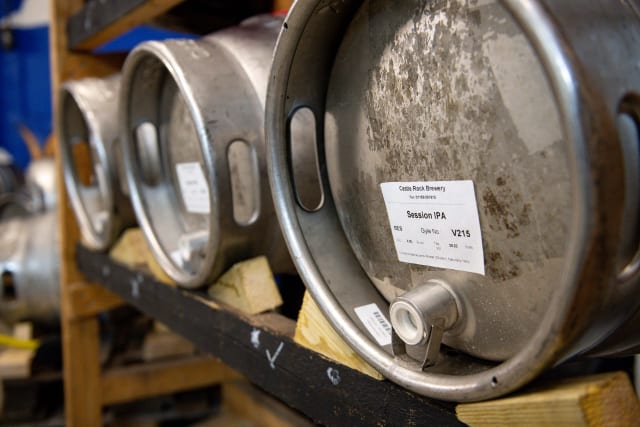 Pub owners and campaigners have urged the Government to reverse the “baffling” and “nonsensical” decision to restrict the sale of takeaway alcohol during a second national lockdown.

Official guidelines state that although restaurants, bars and pubs must close from Thursday, food takeaway and delivery services are still permitted – but serving alcohol to take away is not.

Pub bosses have warned that the new restrictions mean that any beer left in pub cellars will have to be “tipped down the drain”.

The measures are expected to hit smaller, independent breweries hardest and have been described as “disastrous” by campaigners.

James Calder, chief executive of the Society of Independent Brewers (Siba), said urgent clarification on sales restrictions is needed from the Government.

“As if a second national lockdown in England wasn’t disastrous enough for pubs and independent breweries, the Government has gone further this time around and introduced an unjustified restriction banning pubs from selling takeaway beer, a service which was the only source of income for many businesses during the summer lockdown,” he said.

“This is baffling considering supermarkets will presumably still be allowed to sell packaged beer, whilst small breweries and pubs will not.

“It is nonsensical to impose these new restrictions when pubs have time and time again proved that they are Covid-secure, both during lockdown when takeaway was their only option and since pubs reopened on July 4.”

Mr Calder added that, in addition to clarification on sales restrictions, further support is needed for pubs, including the extension of business rate holidays and grants to breweries, and a VAT cut on independent brewery beer.

“Last time we did a delivery service and a takeaway service and, although we weren’t breaking even, at least it was bringing money in to the pub,” he said.

“Now the rules seem to state that you can’t do takeaway, which is ridiculous.

“It means that all of our wet stock, particularly our real ales, will have to be drunk by Thursday or else we’ll have to throw them away – I don’t think the breweries are going to want them back.”

Mr Newcombe said the pub will have to be “mothballed” as it does not provide food delivery, and that uncertainty over the length of a second lockdown is a big concern.

“Our unique selling point is our fine real ales, it’s terrible. The takeaway pints kept the community involved,” he said.

Tom Stainer, chief executive of the Campaign For Real Ale (Camra), said: “Offering alcohol for takeaway was a lifeline for many pubs, and particularly breweries, during the first lockdown.

“It is a baffling and damaging decision to remove this option, particularly when other businesses such as supermarkets are able to continue to sell takeaway alcohol.

“Pubs and breweries were already reporting losses and the risk of closure before Christmas, and this will only add to the risk of permanent closures within the next few months.

“Camra and the entire pub and brewery industry is now urging the Government to reverse this bizarre decision and ensure the survival of our pubs and breweries.”