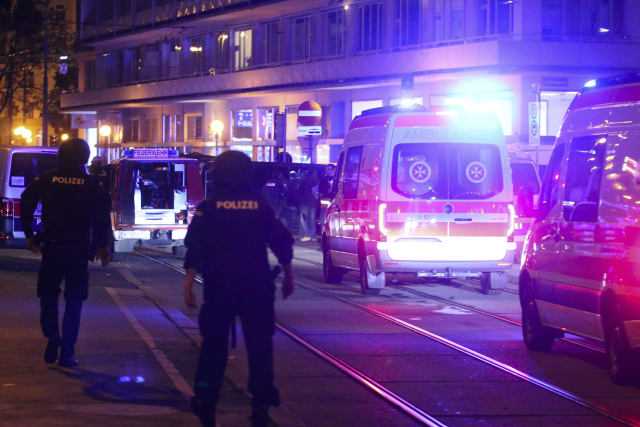 The Prime Minister has expressed his deep shock at the “terrible attacks” in Vienna which have left at least two dead and several injured.

Both Boris Johnson and Home Secretary Priti Patel tweeted to express solidarity with Austria after its capital experienced a deadly attack on Monday evening, with the blame being pinned on terrorists.

Austrian authorities have confirmed two people are dead and 15 wounded, including one police officer, after gunmen opened fire on those enjoying a last evening out in Vienna before a coronavirus lockdown comes into force.

Mr Johnson said: “I am deeply shocked by the terrible attacks in Vienna tonight.

“The UK’s thoughts are with the people of Austria – we stand united with you against terror.”

The city’s streets were reportedly particularly busy as people took to bars and restaurants on the eve of the introduction of harsher restrictions aimed at preventing the spread of Covid-19.

The incident comes after a series of terror incidents in France in recent weeks, with three people killed at Nice basilica last month, while teacher Samuel Paty was beheaded in the suburbs of Paris after showing his pupils a cartoon depicting the Islamic prophet Mohammed.

Ms Patel tweeted: “Deeply shocked and saddened by the incident that has taken place in Vienna this evening.

“My thoughts are with everyone who has been affected and we stand ready to support in any way we can.”

Vienna police said several shots were fired shortly after 8pm local time in a lively street in the city centre, and that there were six different shooting locations.

Police urged people to avoid all open spaces and public transport in the city.

“There are several injured persons,” police tweeted. “We are on site with all available forces. Please avoid all public squares in the city.”

Oskar Deutsch, the head of the Jewish community in Vienna, said the shooting took place in the street where the city’s main synagogue is located but that it was not clear whether it had been targeted.

The synagogue was closed at the time of the shooting, he added.