Families of disappeared ‘endured pandemic-style waits for bodies for decades’ 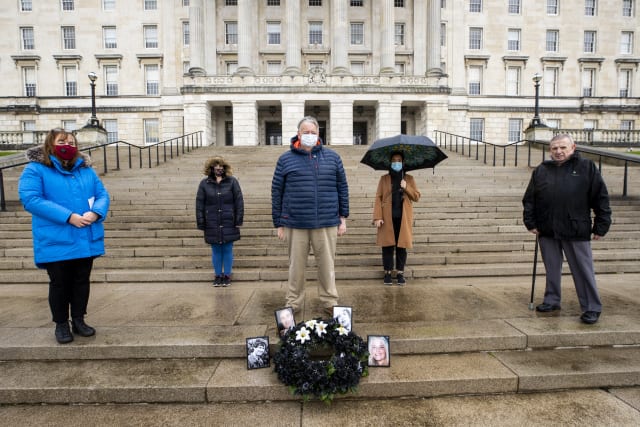 Families of those murdered and buried in secret during Northern Ireland’s armed conflict endured decades-long pandemic-style separation from loved ones, supporters said.

A handful donned face masks and braved inclement weather to hold a silent All Souls Day walk remembering the Disappeared at Stormont on Monday.

The Disappeared has long been the term for those who vanished, abducted by republicans who suspected them to be informers for the British, a smear in nationalist circles which is contested by their families.

Their ranks have diminished as bodies were retrieved but now include Army intelligence officer Captain Robert Nairac and another woman unconnected to the Troubles.

Sandra Peake leads the campaign to find them and said: “Normally up to 80 people would be at the walk every year.

“This year because of social distancing there were only eight people there from the families.

“Covid has given us all a taste of what life is like without family or not participating in the ritual of family burial and having to stay away from families.

“For some of the families it has been like that for 45 years.”

A black wreath with white lilies represented those who have yet to be found and was laid at the building’s steps, a deliberately symbolic spot delivering a message and a plea for help to the wider community.

The three were among 16 people who were murdered and secretly buried.

The IRA is deemed responsible for most, while republican splinter group Irish National Liberation Army was behind one of the disappearances.

Columba McVeigh from Donaghmore, Co Tyrone, was one of the first to be murdered and secretly buried in 1975.

The latest search for his remains in Co Monaghan in the Irish Republic ended without success.

His name is written on his late mother’s headstone in the hope that he would be found.

Capt Nairac is believed to have been abducted from a bar in south Armagh in May 1977.

Unsuccessful searches have taken place for his remains at Ravensdale Forest, across the Irish border in Co Louth.

Searches have taken place for his remains in Co Meath, but ended without success.

Others whose remains have not been recovered include Lisa Dorrian, a shop assistant from Bangor in Co Down who disappeared after a party at a caravan site 15 years ago.

Funerals held with only a handful of people present have characterised 2020.

People have been forced to stay apart for months to hamper spread of the virus.

Ms Peake said: “It is that sense that this is unending for the families and Covid has given us a taste of what it is like to be away from family and the normal rituals of life.”

She said the suffering of relatives of the Disappeared would not end until people came forward and gave information.

“It is a long time for families to wait and the big message is that there are people out there who know and can provide help to the families.

“Everyone deserves to be able to lay their loved ones to rest.

“It is the families tormented by withholding information and nobody deserves that.”