Drakeford: Wales will respect ‘bargain’ with public to end lockdown next week 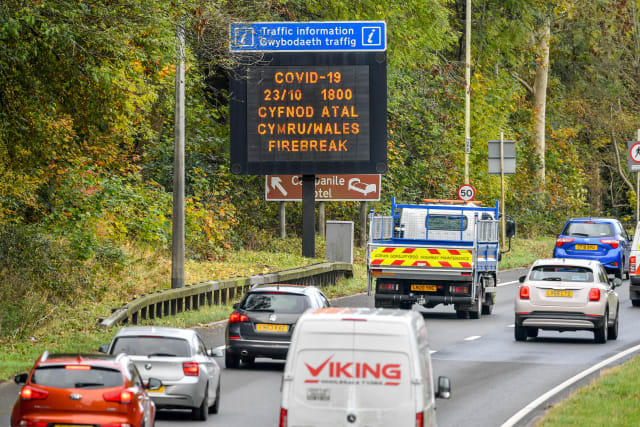 The Welsh Government will not extend Wales’s fire-break lockdown next week, the First Minister has said.

Mark Drakeford said his decision to impose a “short and sharp” 17-day lockdown in Wales means there is no need to extend the period past November 9 to run alongside England’s month-long lockdown from Thursday.

The Welsh Labour leader will outline the details of new national measures for Wales at the Welsh Government’s Covid-19 press briefing on Monday afternoon.

Shops, gyms, schools and places of worship are all expected to reopen, while people will be asked to work from home wherever possible, minimise contact with others and avoid travel.

On Monday morning, Mr Drakeford told BBC Radio Wales he had “struck a bargain” with the public to come out of lockdown on November 9 and would not extend it.

He said: “In theory, of course, we could. But we struck a bargain with the people of Wales back on October 23 that this will be a short but very sharp lockdown period of 17 days.

“I don’t intend to step back from that bargain now just because just across our border a different government has decided to do something different in another part of the United Kingdom.”

He said the Welsh Government is “anxious” about people in England living under lockdown being tempted to cross the border into Wales once restrictions are eased.

Ministers will work through the issues of cross-border travel between the countries, including by rail, with officials from Westminster on Monday, while consideration will be given to people in English border communities potentially using nearby pubs located in Wales.

“It’s important that Wales doesn’t become an escape for people trying to get round the new tighter restrictions being introduced in England,” Mr Drakeford said.

But the First Minister refused to rule out another lockdown this year, saying only that the fire-break is “designed to avoid that”.

“By doing everything we’re doing, and provided we behave in the right way after the lockdown, we are confident that we can get through to Christmas without needing to go through this again,” he said.

Mr Drakeford told BBC Breakfast there will be a “basic set of national rules” in Wales after the lockdown ends, with the public expected to ask themselves what contribution they can make to keep themselves and others safe.

“If we play it as a game in which your job is to think about what the rule is and see how far you can stretch it, then I’m afraid the weeks ahead will be very difficult indeed,” he said.

But he said “large parts of life will be able to resume”, including for retail, hospitality, leisure and schools.

Mr Drakeford said “early indications” show that travel in Wales over the fire-break has been much lower, which suggests people have been following the rules.

The Welsh Conservatives’ health spokesman, Andrew RT Davies, accused Mr Drakeford of “playing politics” over his reasoning for not extending the lockdown.

He said on Twitter: “Mark Drakeford is no longer ‘following the science'(SAGE recommending an extended UK-wide lockdown) but talking about a ‘deal’ he struck with people.

“I do hope the virus is aware of his negotiation. It’s clear it’s never been about the science but always the politics.”

The fire-break was introduced on October 23 in an attempt to help bring virus transmissions under control, with ministers saying it could take around two weeks for the measures to begin to have an effect on daily case numbers.

Plaid Cymru leader Adam Price said that exiting the fire-break should be “slow and steady” to avoid undoing any benefits gained, and called for the ban on people entering Wales from UK Covid hotspots to continue.

“We have learnt two key lessons from the response to the pandemic so far – going into lockdown too late increases the spread of the virus, and coming out too early risks undoing any benefits gained,” he said.

“That is why the approach to the post-fire-break period must be slow and steady.

“There should certainly be no lifting of the travel restrictions which have rightly prevented people coming into Wales from Covid hotspots elsewhere in the UK.”

Wales had imposed 17 local lockdowns across the country before it entered into the fire-break but Mr Drakeford said last week that it would adopt a “simpler” set of national measures after it expired.

The First Minister admitted the series of localised restrictions used during the autumn “didn’t work well enough” to curb the spread of the virus.