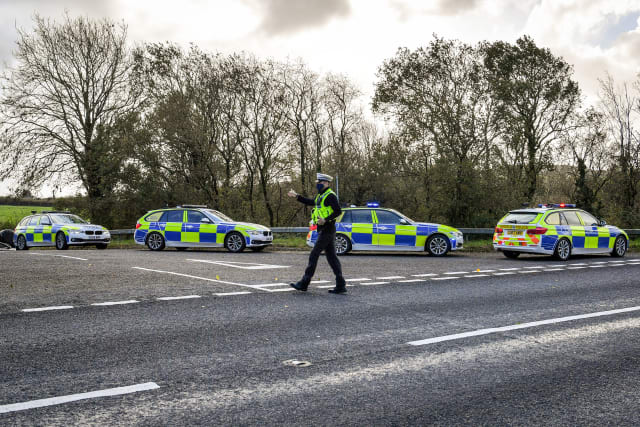 Wales will have its hardest border with England for “several centuries” after the Welsh firebreak is lifted next week, First Minister Mark Drakeford has said.

Travelling between the two countries without a reasonable excuse will be banned during England’s month-long lockdown, which will start from Thursday.

On Monday, Mr Drakeford confirmed shops, gyms, schools and places of worship in Wales will all reopen from November 9 as the country’s 17-day lockdown ends and it adopts new national measures.

The Welsh Labour leader said England’s decision to start its own lockdown four days before Wales’ comes to an end meant that travel between the two without an excuse would be banned.

“But it will be a restricted list of essential purposes, rather than the normal to-ing and fro-ing across the border that you would have seen in less fraught and difficult times.”

Previous rules meant that people living anywhere in the UK with a high prevalence of Covid-19 were not allowed to enter Wales.

Wales’ new national measures when the firebreak ends mean people living in Wales also cannot travel outside it without a reasonable excuse.

However, people living in Wales will have no restrictions on travelling within the country.

Mr Drakeford admitted the measures meant the border between England and Wales may well now be the hardest it has been “for several centuries at least”.

“When we introduced our arrangements, which asked people not to travel into Wales from high-incidence areas elsewhere, we were pretty heavily criticised by some political parties for doing so,” he said.

“Now that it has been found necessary to do that in England, I think that people can at least understand that we were never doing it in Wales just for the sake of the border.”

Mr Drakeford said the announcement of a second lockdown in England came as a “surprise”, with the Welsh Government finding out about it through newspaper reports.

There has since been “more contact” between the devolved nations and the UK Government, he said, including two meetings chaired by Michael Gove, and a possible further meeting to take place later this week.

Mr Drakeford said the decision by England had created a risk that people living there could choose to break the law by traveling to reopened Welsh pubs for a drink.

He said he did not want police forces being diverted to policing the border, and that discussions with the hospitality sector would need to take place in order to avoid “unintended consequences” of the contrasting rules.

Mr Drakeford said: “I don’t want to keep those places closed, I want to see them reopen in Wales. But the Prime Minister’s decision over the weekend does inevitably create a different context.

“If the pubs are closed along the border in England, then there is bound to be a risk that people will try to break the law.”

Asked why Wales would not follow England in imposing a lockdown until December 2, Mr Drakeford said decisions in Wales “cannot and will not” be driven by decisions made by other nations in different circumstances.

“Last week I was being asked a lot of questions about why we had a firebreak at all when in England they were dealing with it by a tiered system, and why hadn’t we done that?” Mr Drakeford said.

“Then at the weekend, the Prime Minister changed his mind and now I’m asked why I don’t follow the latest twist in the English story, and simply we will not be driven by things that happen in that way.

“The advice we had from our chief medical officer and our scientists was that if we acted early and if we had a 17-day period which was short but sharp, the science told us that would be what we needed to help us to turn back the tide of coronavirus in Wales.”

Under Wales’ new national measures from November 9, people will be asked to work from home wherever possible, minimise contact with others and avoid travel.

The new national measures include:

– The need to maintain two-metre social distancing and wear face masks in enclosed public places, including on public transport and taxis, will continue.

– The requirement to work from home whenever possible will remain.

– People should only meet with their “bubble” in their own home and only two households will be able to form a “bubble”. If one person from either household develops symptoms, everyone should immediately self-isolate.

– Up to 15 people can take part in an organised indoor activity and up to 30 in an organised activity outdoors, providing all social distancing, hand hygiene and other Covid-19 safety measures are followed.

– All premises, such as restaurants, cafes, pubs and gyms, closed during the firebreak will be able to reopen. Following the announcement about the English lockdown, ministers are having ongoing discussions with the hospitality sector about the detailed rules for reopening. This includes about meeting in public indoor spaces.

– As part of keeping risks to a minimum, people should avoid non-essential travel as much as possible. There will be no legal restrictions on travel within Wales for residents, but international travel should be for essential reasons only.

Mr Drakeford said that, in addition, all schools will reopen, churches and places of worship will be able to resume services, local authority services will resume and community centres will be available for small groups to meet safely indoors.