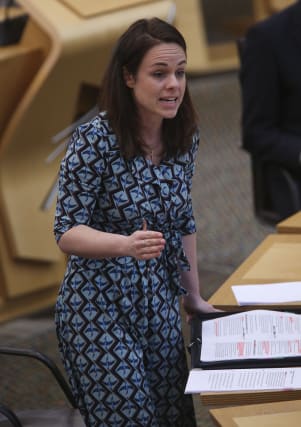 Scotland’s Finance Secretary has suggested the UK Treasury is continuing to deny requests for full furlough to be made available whenever it is needed.

Kate Forbes also criticised the UK Government’s late announcement of the scheme being extended until December for the duration of a national lockdown in England.

Employees will continue to receive 80% of their current salary for hours not worked, up to a maximum of £2,500, in a move described by Chancellor Rishi Sunak as “a vital safety net”.

Despite the news, Scottish First Minister Nicola Sturgeon called for clarity over whether the scheme would be flexible should stricter measures be introduced in the devolved administrations.

But it emerged this would not be the case after discussions took place on Sunday – just hours before Scotland moves to a new five-tier level of restrictions.

Ms Forbes said: “Despite discussions today, UK Treasury continue to deny our request that full furlough at 80% be made available for businesses and employees in Scotland at any point we need it, suggesting that it is only available for the duration of a lockdown in England.

“While clarity that it will be available to businesses whether open or closed is welcome, the lateness of the announcement means many businesses have already taken devastating decisions.

“We also received no clarity on whether we will receive additional Barnett consequentials as a result of increased UK support for English local government and whether the unlimited payments for business support in England funded by Treasury borrowing will be made available on a similar demand-led basis to enable the Scottish Government to match that long-term commitment.

“We have requested urgent discussions with Treasury Ministers and will continue to press for a fair deal for Scotland and to ensure that Scotland has the fiscal support it needs from the UK Government to help businesses, people and communities cope with the economic crisis caused by the pandemic.”

The new restrictions in Scotland will come into effect from 6am on Monday with Levels 1, 2 and 3 broadly comparable to the three tiers of restrictions currently in place in England – before the lockdown there begins on Thursday.

Responding to Prime Minister Boris Johnson’s statement on Saturday night, Ms Sturgeon said financial support such as furlough would make an impact on decisions already taken north of the border.

However she added the Scottish Government “will take considered decisions based on what is right for Scotland”.

Ministers including Ms Forbes have made repeated calls for furlough to be extended since Mr Sunak said in September the scheme would end last month.

Their counterparts in Wales have also questioned why previous requests were refused, with First Minister Mark Drakeford tweeting: “Furlough is crucial for businesses. But Rishi Sunak said he wouldn’t extend it in Wales when we asked.

“He also said ‘no’ when we asked him to bring forward the Job Support Scheme to help businesses – we even said we’d pay the difference. It’s now clear he could have said ‘yes’.”