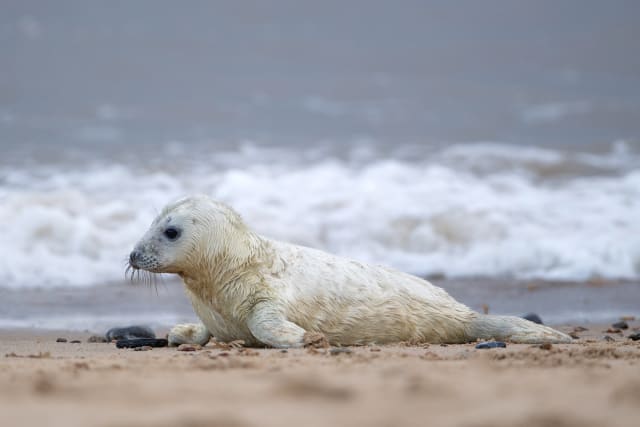 The new national lockdown could put newborn seal pups at risk, a charity has warned.

An increasing number of pregnant grey seals have begun gathering on Horsey Beach in Norfolk as pupping season begins.

Although the beaches have been officially closed to protect the young seals, wardens patrol the area to make sure members of the public keep their distance.

But this is now at risk because of the latest lockdown restrictions in England.

David Vyse, vice-chair of Friends of Horsey Seals, told the PA news agency: “We have got 300 wardens that look after the beaches, and with this lockdown we might not be able to warden and the seals will just be annihilated by people walking on the beach.”

The car parks will be shut but with more than 100,000 visitors to the area last year, Mr Vyse said he does not think that will be enough to stop members of the public visiting.

He said: “If we aren’t able to warden, I just don’t know what will happen to the seals – they will just be pushed back into the sea, they will be abandoned.”

Members of the public are told not to come within 50 metres of the seals because it could cause the mothers to abandon their pups early.

The beaches have been roped off, with people told to keep to the sand dunes above to view the seals.

Mr Vyse said: “There are areas where people can go on the beach and the wardens won’t be there to tell them, so it will be a free-for-all.

“If they are interfered with, they will die.

“Over Christmas, it is like Piccadilly Circus there and that’s why we have to warden.

“I hope we are allowed to but there will be a lot who won’t be able to do it because of the lockdown, for family reasons and so on.”

With the pupping season due to last until February next year, thousands could be born with 2,316 pups born last year.

Once born, the pups remain with their mother for three weeks, during which they grow to three times their size, before she returns to the sea.

Three weeks later the pup sheds its white fur and follows her path down the beach and enters the water for the first time.