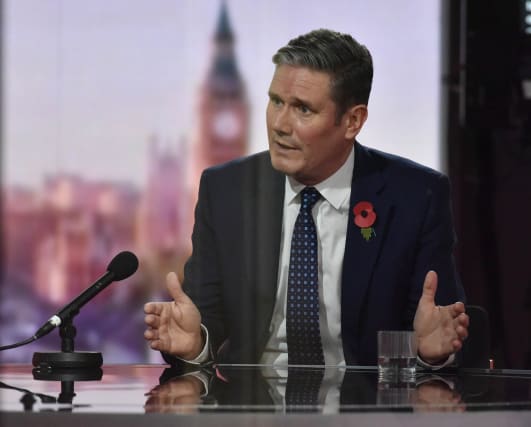 Labour leader Sir Keir Starmer has warned of the “human cost” to the “delay” in bringing in a second national lockdown.

Sir Keir said his party would vote in favour of the latest coronavirus restrictions in Parliament ahead of measures coming into force this Thursday.

But he called on Boris Johnson’s Government to use England’s four-week national lockdown period to fix the issues around NHS Test and Trace, adding if this was not done, “December 2 will be a review date not an end date”.

His comments came as Cabinet minister Michael Gove admitted on Sky News’ Sophy Ridge On Sunday that lockdown could be extended beyond December 2 if coronavirus infection rates do not significantly fall.

Sir Keir told BBC One’s Andrew Marr Show: “Well these measures are necessary, everybody has seen the figures, the infection rates, the admission rates and tragically the death rates, and that’s why three weeks ago we called for a circuit-break.

“Now at that stage the Government rejected it out of hand, ridiculed it, now only to do precisely the same thing – but there’s a cost to that delay.

“The lockdown now will be longer, it’ll be harder, we’ve just missed half-term and there’s a very human cost to this.

“On the day that Sage recommended a circuit-break, the daily death rate was 11, yesterday it was 326, so there’s a very human cost to this, but the measures are necessary.

“We will get a vote this week in Parliament on them… we will vote in favour of the restrictions.”

Sir Keir argued Mr Johnson’s Government had “promised so much and delivered so little” on NHS Test and Trace.

He said: “The Government has to keep its side of the bargain here because if they don’t use this time to fix Test, Trace and Isolate, then I think December 2 will be a review date not an end date.

Sir Keir said the Government could have had a 12-day shutdown of schools during half-term, adding “that is the price of the Government’s incompetence”.

He said schools “must stay open but we’ve got to manage the risk”.

He added: “What I said to the Prime Minister in September was, ‘what you should do is elevate, if you like, children and staff and teachers to the status of NHS staff’ and that means having mass-targeted testing at schools on a weekly basis.

“I’m so frustrated at the incompetence of the Government. If what they announced yesterday had been announced when I said it should have been – two or three weeks ago – we could have had the lockdown and schools shut because of the natural break of half-term and people will be waking up this morning and thinking ‘how on Earth did it get to this?’

“The Government was too slow in the first phase of the pandemic and now it’s being too slow again and there’s a cost to this. That’s why the lockdown will now go on longer.”

Asked if it should be a UK-wide lockdown, Sir Keir said: “Ideally yes… it should be a four-nation approach if that’s possible. It’s for the PM to lead on that.”