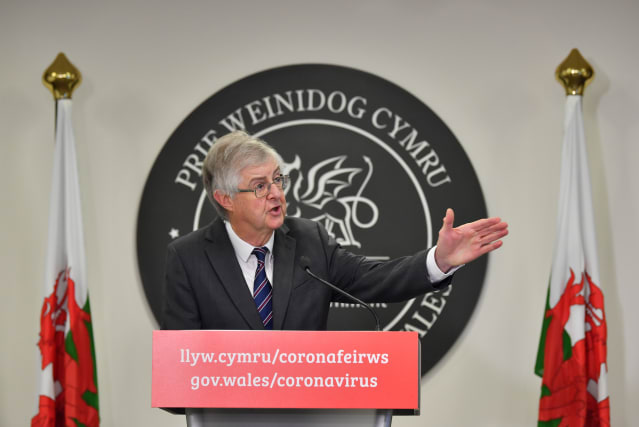 Welsh Government ministers are to meet to discuss “any potential border issues” for Wales, amid speculation a lockdown will be imposed in England next week.

First Minister Mark Drakeford reiterated that the firebreak lockdown in Wales, which came into force on October 23, will end on November 9.

He said any announcement by Downing Street will “relate to England”.

Public Health Wales said on Saturday that 1,301 further people have tested positive for the virus, which takes the total number of infections to 50,872.

Another 13 deaths of patients with Covid-19 were also reported, bringing the total in Wales to 1,872.

“Our cabinet will meet tomorrow to discuss any potential border issues for Wales in light of any announcement by No 10.”

Under the firebreak regulations, people who live outside Wales must not enter or remain in the country without a reasonable excuse.

Prime Minister Boris Johnson will be joined by his chief medical and scientific advisers, Professor Chris Whitty and Sir Patrick Vallance, at a Downing Street press conference on Saturday evening, following a meeting of the Cabinet.

Mr Johnson has so far resisted pressure to introduce nationwide restrictions, opting instead for a localised tier system.

However, he is reportedly now considering closing everything except essential shops and education settings for a month from Wednesday.

On Friday, Mr Drakeford confirmed a “simpler” set of national coronavirus restrictions would be adopted across Wales when the firebreak lockdown ends.

Shops, bars, restaurants and gyms will reopen on November 9 when the national measures come into force, with pupils returning to schools, and churches and places of worship resuming services.

But a travel ban preventing people in areas of the UK with high levels of coronavirus from entering Wales could be included in the restrictions if incidence rates in England go on being much higher.

Mr Drakeford told a press conference on Friday: “If that remains the same, then we will expect to have a similar regime after November 9 as we had prior to October 23 because it just doesn’t make sense to add to the difficulties we already face by the virus being imported from elsewhere.”

Mr Drakeford said 1,191 people are in hospital with coronavirus-related symptoms, 20% more than at the same point last week – and the highest amount since the end of April.

Under the firebreak rules in Wales, people can only leave their home for limited reasons such as to buy food and medicine, provide care or take exercise, and must work from home where possible.

Leisure, hospitality and tourism businesses are closed, along with community centres, libraries and recycling centres, while places of worship are shut other than for funerals or wedding ceremonies.

Non-essential items must not be sold in shops such as supermarkets that are allowed to remain open during the 17-day period, though customers can ask to buy such products by exception.