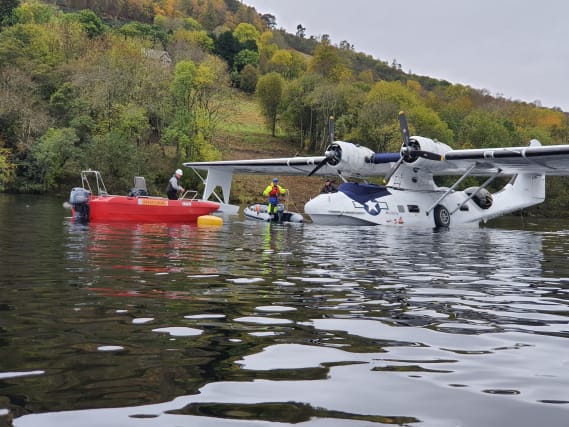 More than £26,000 has been raised in a bid to keep a Second World Ware seaplane in the air after an engine failed to restart from landing on Loch Ness.

The PBY Catalina flying boat, Miss Pick Up, had just finished flying across the Highland loch on October 17 while filming for a TV production before getting stuck on the water.

It was rescued by the RNLI, towed to Urquhart Bay for safety and lifted out of the water by a crane – however, the damaged engine was in need of a replacement.

Plane Sailing, the Cambridge-based team of pilots and volunteers, made an online appeal for donations to make the vital repairs of the aircraft based at the Imperial War Museum Duxford.

The plane was produced for the US Navy but was also flown by the RAF and air forces of Australia, New Zealand, Canada, the Netherlands, and the Soviet Union.

Its two engines each normally last for about 1,200 hours flying before refurbishment.

The Catalina team planned to drive their spare engine to Scotland and complete the change, go back out onto the loch, then fly to Inverness Airport for refuelling before returning home to Duxford.

As of Saturday evening the team’s GoFundMe page – https://www.gofundme.com/f/misspickup – has nearly met its £29,400 target.

He said: “Once the damaged engine is replaced we need to put her back onto the water so she can be flown home.

“Otherwise she will be at the mercy of the harsh Scottish winter on a Loch (which as we all know is home to a certain wee beastie) rather than her usual cosy hanger in Duxford.

“The damage this could do to the aircraft – an important piece of aviation history – could be irreparable.

“We have been absolutely staggered and humbled by the generous donations from so many of Miss Pick Up’s supporters.

“Yesterday the future looked bleak. Today, with the Cat safely on dry land again, there is a light glimmering at the end of the tunnel.”

Questions for the ‘special relationship’ as Biden enters the White House