Sturgeon to seek clarity over furlough extension amid England lockdown 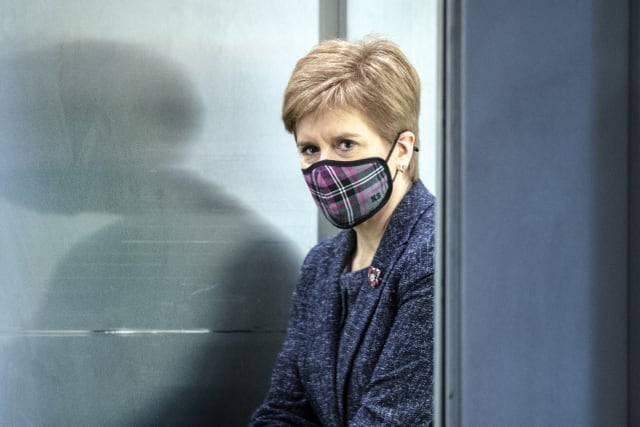 Nicola Sturgeon has said she and the Scottish Government will seek clarity over the furlough extension announced by Prime Minister Boris Johnson.

The First Minister of Scotland said such support would make an impact on decisions previously taken north of the border, however added the devolved administration “will take considered decisions based on what is right for Scotland”.

Mr Johnson’s announcement came as he also announced England would go into a national lockdown from Thursday until early December.

In Scotland, the new five-tier levels of restriction will come into effect on Monday – with Levels 1, 2 and 3 broadly comparable to the three tiers of restrictions currently in place in England.

Responding to the PM’s statement on Saturday night, Ms Sturgeon said: “We will carefully consider the impact of today’s announcement in England – however, we will continue to take decisions that reflect circumstances in Scotland.

“We expect to have further discussion in the coming days about the scope of additional financial support being made available.

“A crucial point for us is whether support on the scale announced for English businesses is available for Scottish businesses now or if we needed to impose further restrictions later – or if it is only available if Scotland has a full lockdown at the same time as a lockdown in England.

“However, notwithstanding the above, today’s developments should be a reminder to people across Scotland of the need to follow the rules and not to put their own twist on them.

“It is important we all comply with the rules in our area if we are to successfully suppress the virus, protect the NHS and keep as many businesses and services open.”

Scottish Government ministers and SNP MPs have made repeated calls for furlough to be extended since Chancellor Rishi Sunak said in September the scheme would end this month.

Ms Sturgeon has also previously warned the new measures in Scotland represent the best chance of avoiding another national lockdown.

She added: “People across Scotland have faced significant restrictions since late September as we work to stop the increase in Covid cases across the country.

“Prevalence of the virus is currently lower in Scotland than in other parts of the UK and there are some signs that those earlier restrictions may be starting to slow the rate of increase.

“We will not hesitate to increase the level of protection either locally or nationally if required. Our new levels approach – including a potential Level 4 – enables us to respond quickly and flexibly as required.

“Following today’s announcement by the Prime Minister we are also asking that people do not travel to England, or from England into Scotland unless absolutely essential, just as we are also asking people not to go to Northern Ireland or to Wales.

“We know that these restrictions are difficult, but public health and preventing the spread of the virus must come first.”