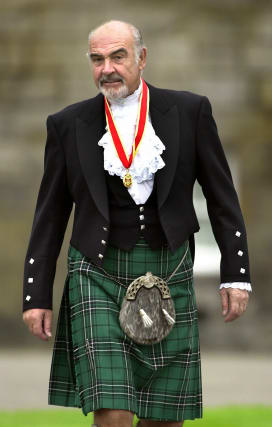 Pierce Brosnan has joined the flood of tributes to “one of the true greats of cinema”, Sir Sean Connery, saying the Scottish actor “cast a long shadow of cinematic splendour that will live on forever”.

Sir Sean, seen in the eyes of many as the definitive James Bond, died “peacefully in his sleep surrounded by family” at home in the Bahamas on Saturday.

Over a glittering, five-decade career, the Scottish actor won an Oscar, two Baftas and three Golden Globes, and continued to find huge success after leaving Bond.

Stars including Robert De Niro, Kevin Costner, Sir Michael Caine and those who followed Sir Sean as 007, including Daniel Craig, George Lazenby and Brosnan, joined the world of film and beyond in remembering the late actor.

Brosnan, who starred as the secret agent in four films, said each subsequent Bond looked to Sir Sean “with reverence and admiration”.

He said: “Sir Sean Connery, you were my greatest James Bond as a boy, and as a man who became James Bond himself. You cast a long shadow of cinematic splendour that will live on forever.

“You led the way for us all who followed in your iconic foot steps. Each man in his turn looked to you with reverence and admiration as we forged ahead with our own interpretations of the role.

“You were mighty in every way, as an actor and as a man, and will remain so till the end of time. Your were loved by the world, and will be missed. God bless, rest now, be at peace.”

She said: “At least he died in his sleep and it was just so peaceful. I was with him all the time and he just slipped away. It was what he wanted.

“He had dementia and it took its toll on him. He got his final wish to slip away without any fuss.”

Micheline, a 91-year-old Moroccan-French painter who married Sir Sean in 1975, added:  “He was gorgeous and we had a wonderful life together. He was a model of a man. It is going to be very hard without him, I know that. But it could not last for ever and he went peacefully.”

De Niro, Costner and Sir Sean starred in 1987’s The Untouchables together, with the Scottish star earning a best supporting actor Oscar for his role as veteran policeman Jimmy Malone.

In a statement to the PA news agency, De Niro said: “I’m very sorry to hear about Sean’s passing. He seemed much younger than 90; I expected – and hoped – he’d be with us much longer. See you up there, Sean.”

Costner tweeted: “I, like the rest of the world, was deeply saddened to learn of the passing of Sean Connery this morning. Sean was a crafted actor who was enormously proud of his body of work, particularly his work on stage.

“And although he was a very no-nonsense person, he was incredibly inclusive with me professionally and personally. He was the biggest star that I ever worked with and I will be forever grateful to be linked with him on film. Sean Connery was a man’s man who had an amazing career.”

Bond star Craig hailed Sir Sean as “one of the true greats of cinema”.

Craig, who is due to appear as 007 for the final time in the delayed No Time To Die, shared a tribute via the official Bond Twitter account.

The 52-year-old said: “It is with such sadness that I heard of the passing of one of the true greats of cinema. Sir Sean Connery will be remembered as Bond and so much more. He defined an era and a style.

“The wit and charm he portrayed on screen could be measured in mega watts; he helped create the modern blockbuster. He will continue to influence actors and film-makers alike for years to come.

“My thoughts are with his family and loved ones. Wherever he is, I hope there is a golf course.”

Australian actor Lazenby, who played Bond in 1969’s On Her Majesty’s Secret Service, paid tribute to “a great actor, a great man and underappreciated artist”.

Michael Bay directed Sir Sean in 1996 action film The Rock. He penned a tribute in the Hollywood Reporter, recalling how he was “terrified” when first working with the actor, who nicknamed him “boy”.

He told how Sir Sean intervened when studio executives were pressuring Bay for being two days over schedule.

Bay said: “He did it because he loved movies. He loved excellence and doing the best he could. His work ethic was bar none, the best I’ve ever experienced.”

Also speaking to the Hollywood Reporter, Baldwin compared Sir Sean to other titans of cinema, including De Niro and Al Pacino, saying his death is the end of an era.

He said: “As we lose more and more of those people, it’ll be the end of an era because those are really the last real movie stars. Everybody that became a movie star after 1980, it’s a little bit different. It’s not as overwhelming, it’s somewhat different.”

Sir Sean was the first to bring the role of 007 to the big screen and he appeared in seven of the spy thrillers between 1962 and 1983.

He was repeatedly voted by fans as the best actor to have played 007 in the long-running franchise, beating Craig and Sir Roger Moore.

He was knighted in the 2000 New Year Honours for services to film drama. In August, he celebrated his 90th birthday.

Born Thomas Sean Connery in Edinburgh’s Fountainbridge area on August 25 1930, the actor left school at an early age and took his first job as a milkman.

At 16 he enlisted in the Royal Navy but was discharged three years later on medical grounds after suffering a stomach ulcer.

His first major step into acting came in 1957 when he secured a role in the British gangster film No Road Back.

However, it was his casting as Ian Fleming’s fictional British secret agent James Bond in 1962’s Dr No that catapulted him to stardom.

Sir Sean was initially reluctant to commit to a film series but filled the role until 1967’s You Only Live Twice, when he quit after becoming tired by the repetitive plots.

He was enticed back after Lazenby, his successor, failed to impress fans and critics.

Sir Sean won a new generation of fans with his compelling performance as the father of Harrison Ford’s hero in Indiana Jones And The Last Crusade.

From his home in the Bahamas, he remained a fervent supporter of Scottish independence.

In interviews in the run-up to the 2014 referendum, he claimed he might return to live in Scotland if it voted to leave the UK.

Scottish First Minister Nicola Sturgeon said he was one of the country’s “best loved sons”.

Sir Sean was also a keen footballer and played for the Bonnyrigg Rose club as a young man.

Bond producers Michael G Wilson and Barbara Broccoli  said: “He was and shall always be remembered as the original James Bond whose indelible entrance into cinema history began when he announced those unforgettable words –’The name’s Bond… James Bond’ — he revolutionised the world with his gritty and witty portrayal of the sexy and charismatic secret agent.”

Sir Sean died in Nassau in the Bahamas, where much of Thunderball was filmed, and will be laid to rest in a private ceremony before a memorial is held following the pandemic, his publicist said.