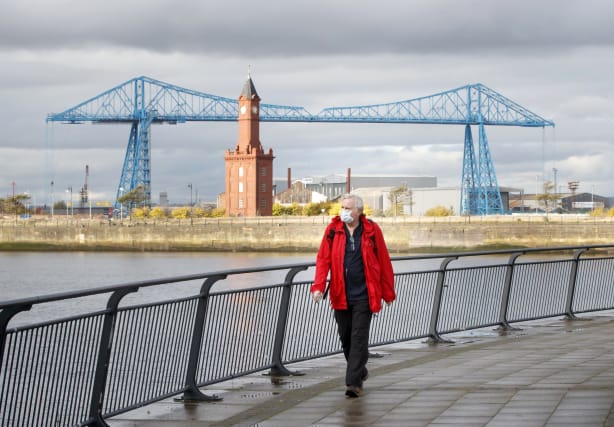 Part of the North East of England is heading for the toughest level of coronavirus restrictions, although the rise in new cases in the region is starting to level off.

The Labour MP tweeted: “Local leaders are thrashing out a package for the Tees Valley Region right now.

“MPs will be informed of the outcome later today but we are moving towards Tier 3.”

Redcar and Cleveland Council leader Mary Lanigan had said on Thursday that the Government wanted to put the Tees Valley in the top tier, but that negotiations were not finished.

The same evening the Independent elected Mayor of Middlesbrough Andy Preston said NHS capacity to cope with Covid-19 patients was “disappearing fast” and a crisis lay ahead if no action was taken.

Dr Richard Cree, an intensive care consultant at the James Cook University Hospital in Middlesbrough, has blogged about the pandemic.

He wrote: “We had not expected that things would be getting this bad this quickly.

“Don’t get me wrong, we are all more than able to cope with the current workload but are worried about how bad things might be, come Christmas.

“God only knows what surprises Santa will bring us this year.”

The Office for National Statistics (ONS) released figures which showed new cases were continuing to rise in the wider North East region, but at a slower rate than elsewhere in the North of England.

While rates remained high in the North East, the ONS said they have now levelled off and “there is now a larger gap with the other two northern regions”, Yorkshire and the North West.

Analysis by the PA news agency showed that, while the estimated percentage of people in North East testing positive went from 0.57% for the period September 12 to 25 to 1.41% for the period of September 26 to October 9, the rate of increase appeared to be levelling off, with the latest figure being 1.43% for the period October 10 to 23.

Meanwhile, the seven local authorities north of the Tees Valley remained in Tier 2.

Leaders in Northumberland, Newcastle, North and South Tyneside, Gateshead, Sunderland and County Durham have agreed their area did not need to step up a level and they will continue to argue against entering Tier 3.

A meeting is expected to be held with the Government on Monday.