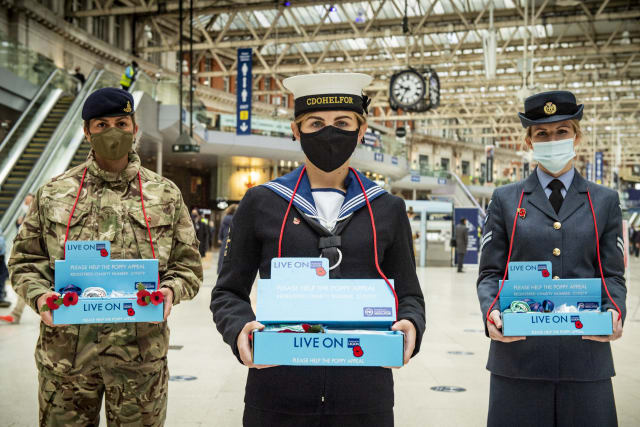 Soldiers unable to gather and mark Remembrance Sunday due to Covid-19 have been going on memorial walks from their base instead.

In normal times, around 300 troops go on parade in Colchester in Essex on Remembrance Sunday.

The event is not happening this year but the base’s chaplain has mapped out a walk so soldiers can reflect on the meaning of Remembrance individually or in small socially-distanced groups while observing the government’s rule of six.

The four-and-a-half-mile route takes soldiers from Merville Barracks and past key monuments in the town.

These include the war memorial and the town’s cemetery, where 389 Commonwealth soldiers killed since the First World War are buried.

It passes the the barracks’ Dakota gate guardian and the Cpl Budd VC Gymnasium which was named in honour of Corporal Bryan Budd VC who was killed in Afghanistan in 2006 and awarded a posthumous Victoria Cross for his “inspirational leadership and supreme valour”.

The route finishes back at the barracks’ memorial garden, where soldiers can plant a poppy cross as an act of Remembrance.

Soldiers can follow the route in their free time.

Reverend Ollie North, chaplain to 13 Air Assault Support Regiment Royal Logistics Corps, said: “Creating this walk was a direct response to coronavirus, which means that we don’t have the chance to come together and discuss what Remembrance means.

“The route is a physical, emotional and mental journey for soldiers to explore the history and relevance of Remembrance, both for them as serving soldiers and for the wider community in Colchester.

“For me, the perfect outcome of a soldier doing this walk would be that when he or she stands to attention at 11 o’clock on November 11 their head and heart are in the right place, having really considered the sacrifices made by others on their behalf.”

Private Jamie Taylor did the walk with four colleagues from 13 AASR’s 63 Squadron.

The 21-year-old, from Sheffield, said: “It’s been interesting to understand more about what Remembrance means to the town and the garrison.

“I found the cemetery particularly moving.

“It was such a peaceful and well-cared-for place and seeing all the soldiers’ graves makes you realise what sacrifice means.

“Going on this walk has really opened my eyes about Remembrance and made me more aware of what people gave for us to have our freedoms today.”