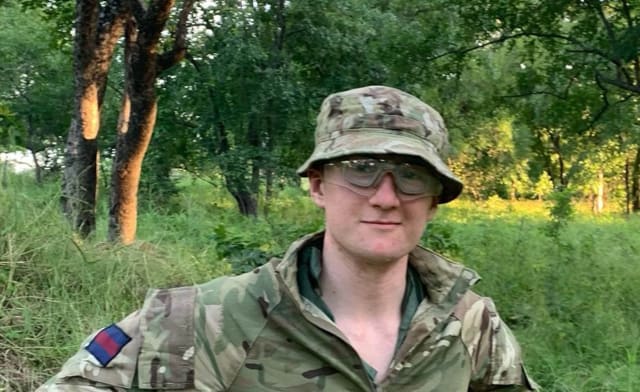 The parents of a soldier killed by an elephant charge on an anti-poaching patrol have said Army safety chiefs should “hang their heads in shame” after publication of a report into the incident.

A Ministry of Defence (MOD) service inquiry, published on Friday, highlighted short-comings in estimating how long it would take to get a casualty from a remote location to the nearest hospital.

Guardsman Mathew Talbot of the 1st Battalion the Coldstream Guards was fatally injured in the incident in Liwonde National Park in Malawai on May 5 2019.

He was part of a five-man mixed Malawian and British patrol, deployed as part of an anti-poaching operation when he was attacked.

The 22-year-old soldier, who had dreamed of joining the Army, was on his first operational tour when he suffered multiple serious injuries.

A report found that although medics battled valiantly for more than four hours to save his life during the evacuation, he was still likely three hours from the nearest hospital.

That was despite an Army risk assessment stating casualties should reach hospital within four hours of an incident, known as the “medical timeline”.

Because of the assumptions the timeline was achievable, the lack of any available medical helicopter was never considered an issue.

It found supplies of the three treating British Army medics were “just adequate”, but praised their actions as having given Gdsm Talbot a fighting chance.

However, a key vital signs monitor failed to work correctly, there were a lack of blood products and confusion over when powerful pain medication could be used on patients with head injuries and breathing trouble.

As a result, the seriously injured soldier had no pain relief while he was being transported.

A consultant-led post-mortem examination found the young soldier’s death was “not preventable” given the circumstances.

But the report concluded Gdsm Talbot would have had a 50%-60% chance of survival had he reached a hospital in Blantyre some 160km away.

“The underestimation of the medical timeline and the resources in place to assure it were inadequate,” the report concluded.

The injured soldier was also transported in the back of a Land Rover 130 which were “not designed to be ambulances”.

Just days after the incident, the pre-planned delivery of a Toyota ambulance arrived, the report noted.

At the time of the incident, Gdsm Talbot was in a five-member team alongside a British Army sergeant and three African park rangers, part-way through an eight-day patrol.

They had been moving through two-metre high elephant grass when they spotted three elephants just 30 metres ahead.

Gdsm Talbot, who joined the Army in 2013, was injured when another elephant, unseen, charged the patrol from the side.

The sergeant commanding the patrol managed to climb a tree.

But as Gdsm Talbot tried to do the same “he was caught by the charging elephant, thrown in the air, then attacked whilst on the ground, sustaining significant injuries”.

The sergeant managed to scare off the attacking elephant with a fire cracker and give Gdsm Talbot first aid.

At 10.20am, the patrol leader radioed an emergency medical call to the ranger camp more than 10km away.

But the four then had to stretcher Gdsm Talbot to a rendezvous on foot taking nearly an hour.

Medics were able to stabilise the young soldier but had to twice stop to carry out medical procedures, delaying the evacuation.

Despite trying for 57 minutes to resuscitate the soldier, they were unable to save Gdsm Talbot.

Praising the patrol’s sergeant, the inquiry put the success of the stretcher team’s initial evacuation as “solely down to his experience, excellent leadership and personal strength”.

But the inquiry found British soldiers had been unable to aim a shot at the elephant “nor were warning shots permitted under UK rules of engagement”.

It concluded this “dangerous uncertainty” resulted in hesitation and effectively denied Gdsm Talbot of his “primary means of self protection”.

The Army’s use of force rules have since been changed, allowing warning shots on anti-poaching operations.

Along with 30 other recommendations, the report also called for immediate improvements to training. So soldiers kept away from elephant grass where possible and were given a refresher on specific actions to take if charged by elephants.

An inquest into the soldier’s death will take place at Oxford Coroner’s Court in due course.

In a statement released through lawyers Irwin Mitchell, the soldiers’ parents Steven and Michelle Talbot said it had it had taken months “to get any of the answers” from the Army.

They said: “When Matt passed away it was four hours and 17 minutes after the attack and it would have taken at least another three hours to get to the hospital in Blantyre.

“Those that are responsible for putting these risk assessments in place should hang their heads in shame if they think this is adequate for our brave serving soldiers who are prepared to put their lives on the line for Queen and country.

“This is not just about justice for Matt but also the lives of all the other brave soldiers, as we do not want other families to go through this.”

In a statement released through the Ministry of Defence, Brigadier Ben Cattermole, Commander 11 Brigade, said the Army’s “thoughts and sympathies” were with the bereaved.

He added: “The welfare of our personnel is of the utmost importance and the MOD has accepted all of the recommendations in this report, including robust training to better assess the risk of animal attack and fully rehearsing medical procedures before operations begin.

“We have already put in place plans to implement these recommendations and changes will be made as soon as possible.

“The MOD will review the coroner’s findings when available and address any additional recommendations.”