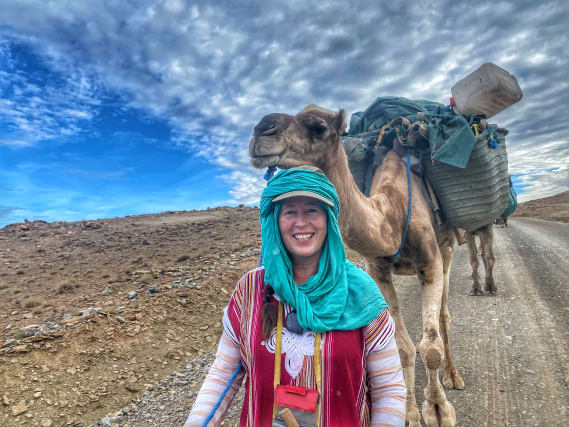 A Scottish explorer has detailed the “devastating” impact coronavirus has had on nomadic communities after completing a trek across Morocco.

Alice Morrison travelled 870 miles (1,400km) on foot through the country’s mountains as part of the Atlas Expedition.

The 68-day exploration began in Nador on the Mediterranean Coast in August and finished in Ouarzazate at the mouth of the Sahara on Tuesday.

It faced a constant threat of being abandoned due to Covid-19.

On her journey, the explorer from Edinburgh found out about the huge impact the disease is having on nomadic people.

She said: “I have witnessed first-hand how even the most remote nomadic tribes have been affected.

“In the 1,400km of walking, every single community we met told us that they’d had no cases but the economic effects had been devastating.”

The nomads of the region live a deeply traditional lifestyle dependent on their flocks, selling sheep and goats to buy essentials.

A sheep would usually reach 500 Moroccan dirhams (£42) at market but now gets only 100 (£8) as hotels and restaurants have shut and households are cutting down on meat.

The loss of income – as well as the ongoing drought and subsequent lack of grazing – has been described as “catastrophic” for the herdsmen and women.

This is the third part of Ms Morrison’s exploration trilogy of Morocco.

She has now walked the entire length of the country, around 2,485 miles.

The explorer from Edinburgh was the first woman to walk the full Draa River in the first part of the trilogy, before taking on 1,000 miles of the Sahara desert in part two.

The latest expedition was heavily influenced by re-emerging Covid-19 restrictions but the team was able to find prints made by Sauropods millions of years ago.

Ms Morrison said: “I called the expedition The Quest for Dinosaurs, more in hope than expectation.

“So it was fantastically exciting when we actually found dinosaur footprints in the area near Mgoun at the very end of the exploration after nine weeks of searching.

“At one point as I was perched on a ledge above a sheer 20-metre drop, with my tape measure in hand, I made the mistake of looking down and I did wonder what on earth I was doing.”

She added: “I’ve been walking through history.

“We began in August this year, soon after Morocco’s strict lockdown had been lifted.

“It’s been an extraordinary and sometimes difficult experience with extra logistical and health concerns – but fascinating.”