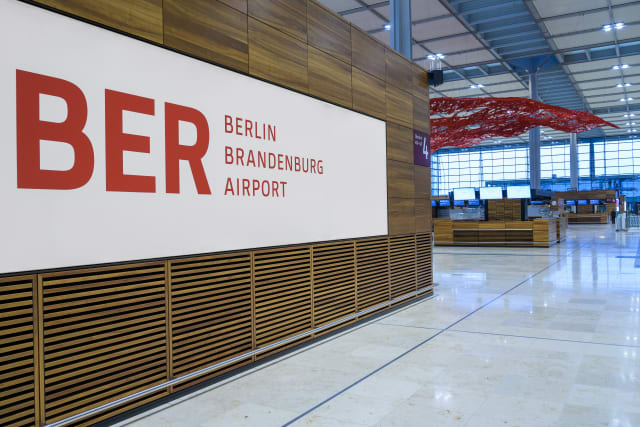 EasyJet will open Berlin’s new airport on Saturday by conducting a parallel landing alongside a Lufthansa plane.

An A320neo aircraft will be flown by the UK’s largest airline to Berlin Brandenburg Willy Brandt Airport (BER), which has been plagued by delays and cost overruns.

Construction and technical problems have hindered the German capital’s new airport, which was initially due to open in 2011.

Aviation bosses and media will be onboard the 20-minute easyJet flight from Berlin Tegel – which closes next week – to BER.

The special flight takes place just two days before Germany enters a new coronavirus lockdown due to a spike in infections.

EasyJet will operate BER’s first commercial departure with a flight to Gatwick on Sunday.

The airline’s chief executive Johan Lundgren said: “After months of preparations, we are ready and proud to be the first airline to start commercial operations at Willy Brandt airport tomorrow where our customers will benefit from an improved experience.”

He added that the airline will make an “important contribution to the region” by connecting Berlin with “major cities and holiday destinations in Europe for many years to come”.

Heathrow chief executive John Holland-Kaye welcomed the opening of BER, which will be the third busiest airport in Germany after Frankfurt and Munich.

He told the PA news agency: “Airport openings are never easy, as I experienced when I was opening Terminal 2.

“But Brandenburg is a much harder gestation.

“It’s good to see it happening. Aviation is going to be vital for the economic recovery for all countries.”

The former will be used as a terminal for the adjacent new airport.

BER boss Engelbert Luetke Daldrup told reporters last month that the delay in opening had made Berlin and Germany “a laughing stock”, adding: “We German engineers were ashamed.”

He said there will be “no big party” on Saturday due to the project’s difficulties.

Demand for air travel has collapsed due to the coronavirus pandemic, and the industry is not expecting passenger traffic to return to normal until 2024.

The UK Government has retained the quarantine exemption for people arriving from Germany despite the country recording a seven-day rate of 107 Covid-19 cases per 100,000 people.