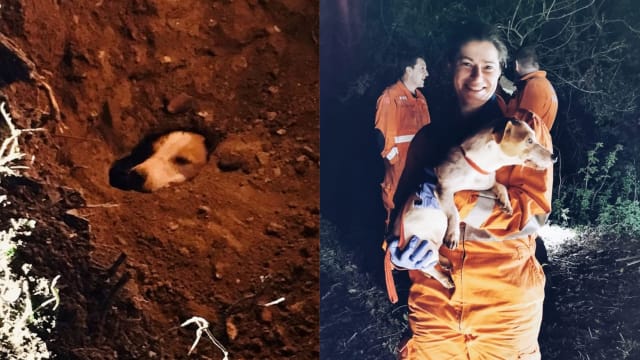 A dog has been rescued from a rabbit warren where he was trapped for 12 hours alongside a fox.

The double-rescue was conducted in Lavant, Chichester, on Wednesday evening after the dog’s owner had spent several hours trying to coax him out of the hole.

West Sussex Fire and Rescue Service’s Technical Rescue Unit (TRU) was able to find Max the Jack Russell with cameras and listening devices, also finding a fox stuck in the hole with him.

“We began to dig around the network of tunnels towards where we had seen Max and the fox,” TRU crew commander Charlie Eastwell said.

“Just as we broke through into the tunnel, Max poked his head out through, and with some encouragement from his owner, out he came.”

Ms Eastwell said the fox ran into the night after Max was safely reunited with his owner with “no lasting damage”.

She said: “It was almost three in the morning by the time we had packed up and left the scene, but we would much rather that people called us for help if their pets end up trapped in a situation like this.

“Not only do we not want people to put themselves at risk trying to rescue their pets, but we have equipment – like listening devices and cameras – that allow us to locate the animal with minimal disruption and destruction to the network of tunnels.

“We were all delighted to see Max reunited with his owner, but we think that both he and the fox have learned their lesson and won’t be exploring any rabbit warrens together in future!”