Cars not bike lanes are clogging up cities – charity 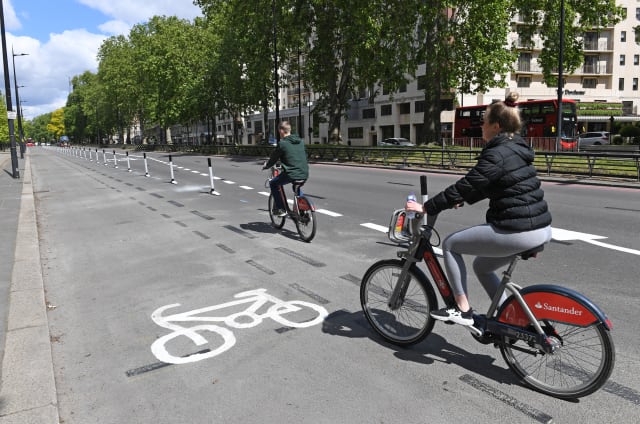 Commuters driving to work instead of using public transport are responsible for clogging up cities rather than the installation of bike lanes, a cycling charity has claimed.

Cycling UK said its analysis of official data demonstrates “we need to make it more appealing” for people to use active modes of travel such as cycling and walking.

It pointed to Government figures showing car use has returned to 83% of pre-coronavirus pandemic levels, despite Office for National Statistics data indicating only 59% of workers have returned to their normal place of employment.

This shows that congestion is being caused by people changing their mode of commuting from public transport to car, according to Cycling UK.

The claim is in contrast with views held by many opponents of emergency active travel schemes featuring pop-up bike lanes and low traffic neighbourhoods.

Some councils have removed or reduced the projects following accusations they were causing congestion.

A petition on Parliament’s website which amassed 23,000 signatures stated that active travel schemes have created “long traffic delays and severe frustration across the country”.

It went on: “Although well-intentioned, the experiment has failed.

“Government guidance supporting such measures, and funds for them, should be withdrawn immediately.”

Duncan Dollimore, head of campaigns at Cycling UK, said: “To be fair to the Government, they predicted congestion and gridlock could be a major problem if people returning to work after the Covid lockdown switched to using their cars.

“That’s why they announced £250 million in emergency funding for councils to implement schemes to make it safer and easier for people to walk and cycle if they wanted to avoid public transport.

“Unfortunately, a vocal minority of people and MPs have taken exception to these schemes, blaming them as the sole cause of congestion.

“Even before the pandemic, congestion was a serious issue for the UK, costing the economy £6.9 billion a year while road users were losing on average 115 hours and £894 a year.

“The simple fact is that we need to make it more appealing for people to cycle and walk, particularly for short journeys, to avoid clogging up our cities with polluting motor traffic.”

Rachel Aldred, professor of transport at the University of Westminster, commented: “Rising levels of motor traffic stem from a failure to provide safe alternatives, like a dense network of protected cycle tracks to give people of all ages real choice about how they travel.

“Without such changes, motor traffic will only grow further as and when lockdowns are relaxed.