What are the different coronavirus restrictions across the UK? 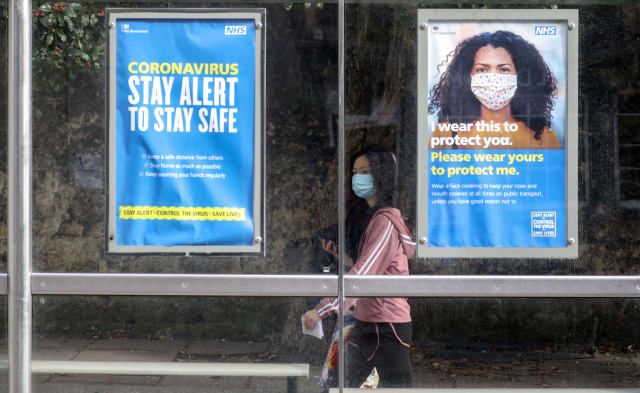 Several areas across the country, including Kingston-upon-Hull and Oxford, will move into the Tier 2 high coronavirus level on Saturday morning.

Areas in Yorkshire and the Humber, the Midlands, the East of England and the South East are among 16 regions which are moving into Tier 2 on Saturday from 00.01.

The shift is taking place because “we continue to see a worrying rise in cases right across the country and it is clear decisive action is needed”, Health Secretary Matt Hancock said.

It comes as a patchwork of different restrictions is now in place across the UK along with large variations in Covid-19 infection rates.

The picture is changing on an almost daily basis, with more areas being placed under higher restriction zones as talks with government continue.

This is the picture in the various nations and regions of the UK.

North-west England has been the region which has seen the earliest and most widespread “very high” level restrictions. It has been at the epicentre of the political rows over the response to rising infection rates.

Liverpool was the first area of England to move into the Government’s Tier 3 category and remains under the strictest controls.

Pubs and bars have been forced to close unless they serve substantial meals. Betting shops, adult gaming centres and casinos have shut, and people have been told to avoid travelling outside their local area.

Lancashire followed Liverpool into Tier 3 and, after a high-profile stand-off between the Government and mayor Andy Burnham, Greater Manchester was also placed in this highest bracket last week.

Covid-19 rates in the North West have continued to rise and hospital trusts in the region have topped lists of hospital admissions for patients with the disease.

Blackburn with Darwen, Lancashire, has the highest local case rate in England, with 774.9 cases per 100,000. The lowest figure for the region is in Allerdale, Cumbria, with 107.4.

But Imperial College’s React study, based on swab tests between October 16 and 25, estimated an R rate for the region of 1.21, which is lower than many other regions.

– Yorkshire and the Humber

This region has seen some of the most concerning rises in infection levels, with corresponding surges in hospital admissions, causing the cancellation of some elective surgeries.

East Riding of Yorkshire, Kingston-upon-Hull, North East Lincolnshire and North Lincolnshire are to move into Tier 2 from Saturday.

South Yorkshire was placed under the highest Tier 3 restrictions on October 24. West Yorkshire is widely expected to follow, although Government talks with council leaders are ongoing.

The chief executive of North Yorkshire County Council has said its Tier 1 status is hanging “by a thread”.

The React study estimated the region has an R rate of 1.54. The latest local case rate statistics show Barnsley, South Yorkshire, with the highest levels, at 545.6 per 100,000 and the lowest in Ryedale, in rural North Yorkshire, at 83.1.

Nottinghamshire is set to become the latest area to have Tier 3 measures imposed. People living in Nottingham, Broxtowe, Gedling and Rushcliffe were the first to be told they were being moved to the highest level. But the Government later announced the whole of the county would be in Tier 3 from  Friday.

Many areas in the East and West Midlands are in Tier 2 but Birmingham City Council’s leader said on Thursday that a move to Tier 3 was “inevitable at some stage”.

Dudley, Staffordshire, Telford and the Wrekin in the West Midlands, along with Amber Valley, Bolsover, Derbyshire Dales, Derby City, South Derbyshire, plus the whole of High Peak, and Charnwood in the East Midlands are going into Tier 2 on Saturday.

The React study has estimated the East Midlands R rate stands at 1.40 and the West Midlands at 1.81. The latest local case rates show the highest levels in Charnwood, Leicestershire, at 458.4 cases per 100,000, and the lowest in Herefordshire, at 86.1.

The whole of north-east England is currently in Tier 2.

There have been concerns over the rising levels of hospital admissions but most of the hospital trusts with the highest levels are further south, in West and South Yorkshire.

On Thursday, political leaders in the North East were scheduled to hold a meeting between themselves to discuss the issue of whether the region should be placed under Tier 3 restrictions.

They have stated their opposition to the idea, saying coronavirus cases had stabilised and the NHS could cope.

London was originally placed in Tier 1 when the current system was introduced but the whole of the capital was put into Tier 2 on October 17.

But concerns have been raised after the React study estimated the capital has an R rate of 2.86. The latest local case rate figures show a narrower range than in many regions, with Ealing the highest, at 227.9 per 100,000, and Lewisham the lowest, at 103.6.

Most of East Anglia is in Tier 1 but Essex was put into Tier 2 on October 17 along with London.

Infection rates have continued to climb in many areas, with the React study estimating the R rate for the region being at 2.18.

South-east England remains in Tier 1, with the exception of Elmbridge, Surrey, on the fringes of the capital, which was placed in Tier 2 at the same time as London.

Oxford is the latest city in the region to go into Tier 2, with restrictions being imposed from Saturday.

A notice on Oxford City Council’s website said it was seeing increasing evidence that the virus was spreading “beyond people in their teens and twenties to older, and potentially more vulnerable, age groups”.

It said that hospital admissions were increasing as a result.

Local case rates, according to the latest figures, vary from 36 per 100,000 in the Isle of Wight up to 198.4 in South Buckinghamshire. But the React study estimated the R rate for the region to be at 2.34.

Luton in the East of England is also moving into Tier 2 on Saturday.

The whole of south-west England remains in Tier 1, with infection rates in many areas among the lowest in the UK. But the latest data from Imperial College’s React study showed the R rate in the region is now above two, at 2.06.

Earlier this week, Bristol’s mayor said the city was implementing a series of measures it describes as “Tier 1 plus”.

The latest available figures showed Bristol had the highest local cases rate in the region, at 356.3 per 100,000. But the rate in Torridge, north Devon, was only 32.2 – the lowest in England.

The whole of Wales is currently under a 17-day “firebreak” lockdown which started on October 23 and will last until November 9.

People can only leave their homes for limited reasons and must work from home where possible. Leisure, hospitality and tourism businesses are closed, along with community centres, libraries and recycling centres. Places of worship are shut other than for funerals or wedding ceremonies.

The majority of Scots will be placed into Level 3 of a new five-tier system from Monday, with the rest of the country in either Levels 1 or 2.

The central belt – including Edinburgh, Glasgow, Stirling and Falkirk – will be joined by Dundee and Ayrshire in Level 3.

Aberdeenshire, Aberdeen, Fife, the Borders, Dumfries and Galloway, Argyll and Bute, Perth and Kinross and Angus will be in Level 2.

Highland, Moray, Western Isles, Orkney and Shetland have been assessed as Level 1.

Levels 1, 2 and 3 are broadly comparable to the three levels in England.

Despite ministers considering putting North and South Lanarkshire into Level 4 – equivalent to a full lockdown – First Minister Nicola Sturgeon said on Thursday no area will be placed into that highest tier at the moment.

Level 0 – which will not apply to any area on Monday – is similar to the situation in August when the virus was supressed to very low levels. Level 4 will only be used when “absolutely necessary”, Ms Sturgeon said.

Retail outlets remain open, along with gyms for individual training.

People have been told they should work from home unless unable to do so, and have been urged not to take unnecessary journeys.