Westminster Abbey to mark centenary of burial of Unknown Warrior 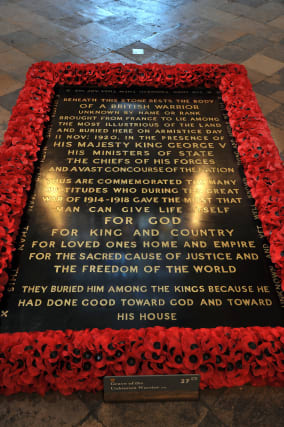 Armistice Day will be marked by a special Westminster Abbey service for the centenary of the burial of the Unknown Warrior.

The service will commemorate the funeral of the unidentified British serviceman – the Unknown Warrior – whose body was brought from northern France and buried in the abbey’s nave on November 11 1920.

The individual represents all those who lost their lives in the First World War but whose place of death is not known, or whose body remains unidentified.

The idea for the burial came from a chaplain at the Western Front, the Rev David Railton, who wrote to the then Dean of Westminster Herbert Ryle about his proposal, which was later supported by King George V and then prime minister David Lloyd George.

The special service will be broadcast live on BBC One and feature the national two-minute silence at 11am.

It will be led by the Dean of Westminster, Dr David Hoyle, and will include an address from the Archbishop of Canterbury, the Most Rev Justin Welby.

The service will be sung by the choir of Westminster Abbey, and the Band of the Grenadier Guards will also perform.

The Padre’s flag, the Union flag given to the abbey by Mr Railton which covered the Unknown Warrior’s coffin at his funeral, will play a central role in the service.

Attendance will be very limited due to Covid-19 restrictions but there will be high-level representation from the Government and armed forces.