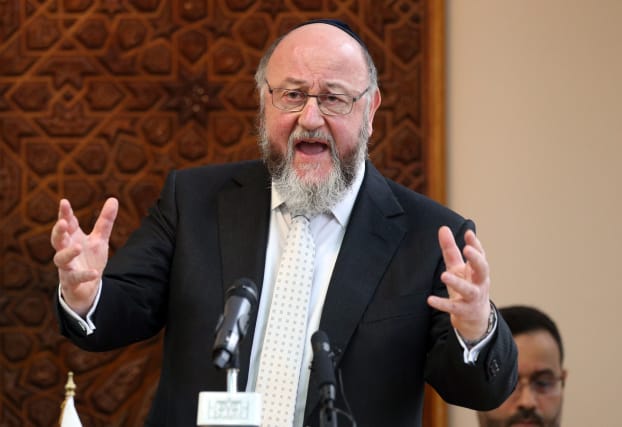 The UK’s most senior Jewish leader was among those to describe his “sadness” at findings that Labour broke equality laws over its handling of anti-Semitism complaints.

Other Jewish groups, however, singled out former party leader Jeremy Corbyn for criticism for what they described as a failure to act on claims of anti-Semitism and referred to him as “a figurehead for old and new anti-Jewish attitudes”.

The Chief Rabbi, who himself previously criticised Mr Corbyn’s perceived lack of action in tackling the issue, said he read Thursday’s watchdog report “with much sadness”.

He said: “The impact of this report reaches well beyond the issue of anti-Semitism or the Jewish community, by sending a powerful message that the politics of scapegoating and hatred will never succeed.”

Mr Mirvis said he was “encouraged” by current Labour leader Sir Keir Starmer’s commitment to change and his “recognition today that the Labour Party has failed Jewish people, its members, its supporters and the British public”.

And he praised party whistle blowers, including those who gave evidence to the watchdog, adding that he hoped to see “a very different Labour Party in the years to come”.

A joint statement from the Board of Deputies of British Jews, the Jewish Leadership Council and the Community Security Trust described the report as “a damning verdict on what Labour did to Jews under Jeremy Corbyn and his allies”.

The statement added: “It proves why British Jews were so distressed and it disgraces those who attacked us for speaking out against anti-Jewish racism.”

Mr Corbyn said he did not accept all the EHRC’s findings and insisted he had improved the process for handling anti-Semitism complaints.

The former leader also claimed the scale of the problem had been “dramatically overstated for political reasons by our opponents inside and outside the party, as well as by much of the media”.

And former Labour general secretary Jennie Formby said Labour’s processes for tackling anti-Semitism were transformed under her and Mr Corbyn’s leadership, although she conceded “mistakes were made along the way”.

But Luciana Berger, one of the Jewish MPs who left the party under Mr Corbyn’s leadership in protest over anti-Semitism within Labour, told BBC Radio Five Live the report findings were “damning”.

She said: “I don’t think they could have been any worse than what we’ve heard and seen today.”

Jewish Labour MP Dame Margaret Hodge said the findings ought to act as “a watershed moment” for the party.

She added: “This is a truly appalling day for the Labour Party.