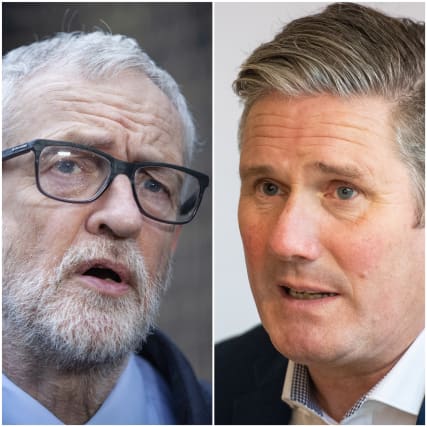 Sir Keir Starmer said the findings of the Equality and Human Rights Commission (EHRC) report into anti-Semitism within Labour represented a “day of shame” for the party.

Here, the PA news agency takes a look at some of the key findings of the report, which highlighted serious failures during Jeremy Corbyn’s leadership:

Sir Keir himself acknowledged how it “never occurred” to him that the party would be found to have committed unlawful acts relating to the very laws it established to tackle discrimination and equality.

The EHRC identified three breaches, relating to political interference in complaints, failure to provide adequate training to those handling anti-Semitism cases, and harassment.

– Political interference by Jeremy Corbyn’s office in the complaints process

The EHRC found 23 instances of inappropriate involvement by the Leader of the Opposition’s Office (LOTO) and others in the 70 files the watchdog looked at.

They included LOTO staff influencing decisions, including on suspensions or whether to investigate claims.

The report said it was not legitimate for Mr Corbyn’s office to influence, make recommendations, or make decisions on complaints outside of the formal complaints process.

It found that interference “fundamentally undermined public confidence in the complaints process”.

The watchdog found that the lack of training for people handling anti-Semitism complaints indirectly discriminated against Jewish members until August 2020, by which time Sir Keir was party leader.

It said the party had not developed or implemented adequate training in relation to anti-Semitism complaints, despite the matter being raised repeatedly internally since 2016.

The report said a lack of training “must have had a negative effect on the quality of complaint handling”, particularly given some of the complexities when balancing free speech and anti-Semitic comments.

– How complaints were handled:

In short, Labour’s response to allegations of anti-Semitism was “inconsistent, poor and not transparent”, the EHRC said.

It found that some complaints were unjustifiably not investigated at all.

The investigation was perhaps made more complicated by the fact that documentation was missing in 62 of the 70 complaints files sent as a sample to the watchdog.

While not a breach of equalities laws, the report did find evidence that, from at least June 2017 to mid-2018, the Labour Party operated a policy of “not investigating complaints about party members’ social media activity if they only liked or shared content without commenting on it”.

It said Labour sought to justify this at the time by stating that sharing posts did not necessarily reflect the views of the person who shared them.

Labour said its policy on social media posts had since changed, something the EHRC described as “positive”.

The report said Labour is “now actively investigating complaints, including complaints against 30 members who shared or liked social media content that appeared to be anti-Semitic”.

The report identified Mr Corbyn’s office as taking part in political interference in the complaints process.

It also cited that his ally, former London mayor Ken Livingstone, had been among those to have harassed party members and had sought to dismiss complaints of anti-Semitism as “fake or smears”.

Mr Corbyn later said he did not accept all of the EHRC’s findings and added that the scale of the anti-Semitism problem in Labour was “dramatically overstated” for political reasons.