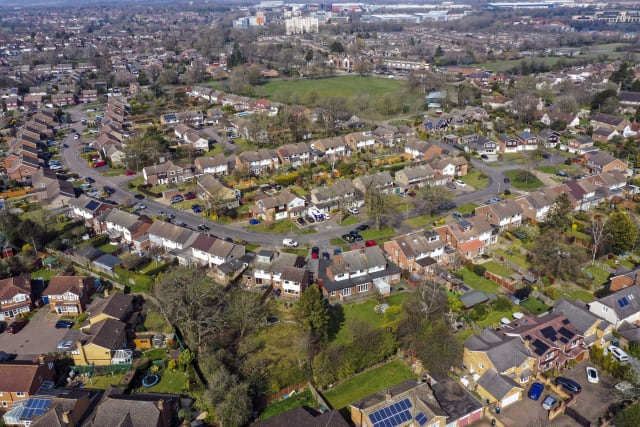 The housing market mini-boom sent the number of mortgage approvals made to home buyers soaring to the highest level since 2007 in September.

Figures from the Bank of England were released as estate agents said there is now a ratio of 13 potential buyers to every available property after house hunter numbers surged to a 16-year high.

The number of mortgage approvals for house purchase continued increasing sharply in September, to 91,500 from 85,500 in August, the Bank of England’s Money and Credit report said.

This was the highest number of approvals since September 2007, and 24% higher than approvals in February 2020.

Approvals in September were around 10 times higher than the trough of 9,300 approvals in May.

The Bank’s figures for remortgaging approvals, which only capture remortgaging with a different lender, show a slight dip compared with August, at 32,700, which is 38% lower than in February this year.

The reopening of the property market after lockdown and a temporary stamp duty holiday which lasts until next March have sparked a flurry of interest from home buyers.

Howard Archer, chief economic adviser to EY ITEM Club, said: “September’s 13-year high for mortgage approvals provides clear evidence of the marked pick-up in housing market activity that has occurred since pent-up demand was released by the easing of restrictions from mid-May onwards.

“This buoyancy has been reinforced by the Chancellor raising the stamp duty threshold to £500,000 from mid-July through to March 31, 2021.”

The figures were released as the National Association of Estate Agents (NAEA) Propertymark said the number of prospective home buyers reached a 16-year high in September.

It said the number of prospective buyers registered per estate agent branch leapt by a third (33%) month-on-month to 525 on average.

This was the highest number of house hunters recorded since June 2004, when 581 were recorded per branch typically.

But in a sign that lenders are toughening up on low-deposit mortgages, its figures also show the proportion of sales made to first-time buyers stood at 19% in September – the lowest amount recorded since March 2013.

Many low-deposit mortgages have disappeared from the market during the coronavirus pandemic, amid concerns about jobs uncertainty and the potential for house prices to fall, which could leave some home owners in negative equity.

But in some better news for first-time buyers, Lloyds Bank reintroduced its Lend a Hand mortgage on Thursday. It aims to help those struggling with a deposit by enabling them to borrow up to 100% of a mortgage with family support.

The Lend a Hand mortgage has a three-year fixed rate at 3.25%.

Instead of a deposit, a family member stumps up 10% of the purchase price as security in a linked savings account, which earns interest. The savings and interest are released after three years, provided all the mortgage payments have been kept up with.

Mark Hayward, chief executive of NAEA Propertymark, said: “The pressure of completing sales ahead of the stamp duty holiday deadline means we’ve seen a large spike in buyers and sellers coming to the market – with an average of 13 buyers to every available property.

“This boom has been hugely beneficial for the housing market.

“However, with a stamp duty cliff edge on March 31, we are calling on Government to rethink these timings due to the increased pressure on service providers within the industry which is causing delays for buyers and sellers.

“Failure to find a solution to the cliff edge, whether that be a taper or extension, could cause thousands of sales to fall at the final hurdle and have a knock-on and drastic effect on the housing market which has recovered well from the Covid slump.”

Mark Harris, chief executive of mortgage broker SPF Private Clients, said borrowers need to consider how long an application is likely to take to be processed.

He said: “Price and criteria are key when choosing a mortgage, but you also need to consider how long it is going to take. There is no point in trying to get a mortgage from a lender who is six months behind if you need to exchange in four weeks.”

Jeremy Leaf, a north London estate agent and a former residential chairman of the Royal Institution of Chartered Surveyors, said: “Unless buyers suddenly change course and cancel mortgage offers, most of these are likely to turn into transactions. Once again the market is proving its resilience.”

But Andrew Montlake, managing director at mortgage broker Coreco, said that while the latest figures are welcome, “the post-lockdown bull run is already over”.

He added: “What’s crucial is that the major lenders don’t go too far and start pulling products for more robust borrowers with larger deposits.

“As surreal as 2020 has been, the onus is on lenders to keep it real as we enter the winter months.”