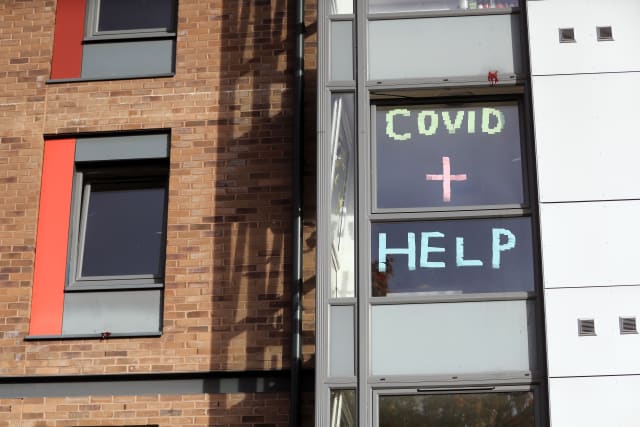 Coronavirus restrictions in England are “not sufficient” with infections doubling approximately every nine days, experts have warned.

As France enters a second lockdown from Friday and Germany imposes a four-week partial lockdown, the second wave of Covid-19 is said to have reached a “critical stage” in England, but the Government continues to resist more stringent measures.

Interim data from round six of the Imperial College London React study estimates there are around 96,000 new infections per day, and found early signs that numbers in low-risk areas are following trends observed in the worst-affected regions.

Communities Secretary Robert Jenrick said coronavirus rates are in a “bad place” all over the country but added that the Government is resisting another national lockdown.

He told Sky News: “We will continue with our localised but proportionate approach on taking action where the virus is strongest, but you can see from those figures that the virus is in a bad place in all parts of the country.

“The approach of trying to bear down on it where it is most concentrated, I think, continues to be the best way forward because despite the fact the virus is rising across the country it is very concentrated in some places nonetheless.”

Mr Jenrick said the Government’s “very firm view” is that a short national “circuit-breaker” lockdown would be the wrong approach, saying “you can’t have a stop-start country”.

But Steven Riley, professor of infectious disease dynamics at Imperial College London, said the data from the React study suggests “we need to think about changing the approach”.

Asked if this meant tightening local lockdowns or national restrictions, he told BBC Radio 4’s Today programme: “I think what our study shows is there would be genuine benefits to some kind of national policy.

“If we’re going to end up using those restrictions that have been brought in elsewhere in Europe today and yesterday… we should think about timing. And sooner is better than later for these.

“The rule of six is fundamentally flawed – it allows people to spread the virus around multiple households completely legitimately.

“Yet this is permitted indoors in Tier 1 and outdoors in Tier 2. All of these mean the virus is still growing.”

Dr Strain said a national lockdown or circuit-breaker can only be effective if there is a “sensible exit strategy”, adding: “I do believe the local approach is likely to be a better way forward. Currently the focus is very much on controlling the outbreaks in Tier 3.

“More focus should be placed on maintaining Tier 1 regions in Tier 1. These areas, after all, are currently maintaining the economy.”

Meanwhile, the Government is reportedly considering the rapid unrolling of saliva-based coronavirus kits in a bid to test up to 10% of England’s population every week.

According to the Guardian, NHS Test and Trace is stepping up its efforts to meet the targets set out in the Government’s Operation Moonshot plans announced last month.

The testing programme would focus on regions under the highest level of restrictions, and would mark a significant increase on current capacity of 2.1 million conventional nose and throat swabs a week.

The leaked letter comes as the latest Test and Trace figures are due to be released on Thursday, a source of criticism for the Government in recent weeks.

Last week’s figures revealed just 59.6% of the proportion of close contacts of people who tested positive were reached – the lowest weekly percentage since the programme began.