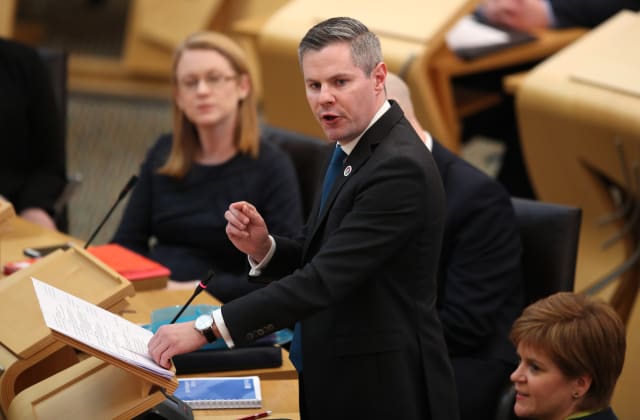 Scotland’s former finance secretary Derek Mackay claimed more than £4,400 in expenses in the aftermath of his resignation from the Cabinet, official figures show.

The MSP quit on February 6 after The Scottish Sun revealed he had sent 270 messages to a 16-year-old boy on social media.

In total, £4,406.50 of taxpayers’ money was used to reimburse the shamed minister during February and March this year.

Mr Mackay’s resignation came on the morning of the Scottish draft budget, leaving his deputy and then-public finance minister Kate Forbes to deliver the speech with just seven hours notice.

The Renfrewshire South and West MSP, who now sits as an independent, claimed for £1,990 of rent payments in February and March and a £132.90 utility bill from Scottish Power for electricity March 11 and April 9.

Mr Mackay claimed back £41.90 for the hiring of rooms or halls, including one the day before the scandal broke.

A further £372 was spent on newspaper advertisements along with £30.40 for waste collection to Renfrewhshire Council.

It comes after Mr Mackay was found to have claimed £327.10 in rent in Edinburgh between July 5 and July 14.

Released via a freedom of information request, he was found to have claimed more than £1,800 in July and August.

During the last financial year, £16,987,056 was paid to MSPs in expenses and allowances, including for stationery costs, staffing and general expenses.