Calls grow for national lockdown in England as Covid cases rise to 96,000 a day 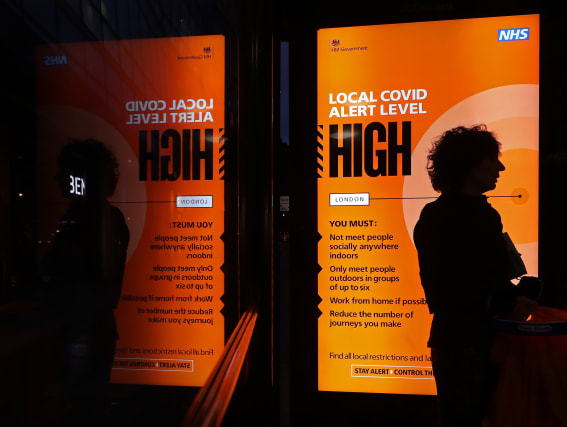 Pressure to impose a national lockdown in England is intensifying as concerns grow over the effectiveness of the current restrictions.

The three-tier system is being called into doubt after a study by Imperial College London found that almost 100,000 people are catching Covid-19 every day in England.

Experts are suggesting a more national approach is needed to address the soaring infection rate.

As France enters a second lockdown from Friday and Germany imposes a four-week partial lockdown, the second wave of Covid-19 is said to have reached a “critical stage” in England.

It adds to growing pressure on the Government to be “tougher and quicker” in its coronavirus response.

The West Midlands could move to tough Tier 3 restrictions as early as next week unless infection rates drop significantly.

The move would see another three million people living under the highest level of restrictions. They would join areas such as Greater Manchester and the Liverpool City region where the measures have already been imposed.

With Nottinghamshire due to enter Tier 3 on Friday, 8.7 million people across the country will be living under the controls by the end of the week.

Interim data from round six of the Imperial College London React study estimates that in England there are around 96,000 new infections per day. Infections were found to be doubling approximately every nine days.

The data also showed early signs that numbers in low-risk areas are following trends observed in the worst-affected regions.

Communities Secretary Robert Jenrick said the Government will “try everything in our power” to avoid a “blanket national lockdown”. But Home Secretary Priti Patel said they would rule nothing out.

Mr Jenrick said coronavirus rates are in a “bad place” all over the country but added that the Government is resisting another national lockdown.

He said the Government’s “very firm view” is that a short national “circuit-breaker” lockdown would be the wrong approach, saying “you can’t have a stop-start country”.

But asked if she would rule out another national lockdown, Ms Patel said: “Well I think at this stage of course we can rule nothing out because we are a Government that is focused on making sure that we stop the spread of this virus and also (that) we protect public health.

The University of Warwick researcher, who sits on the Scientific Pandemic Influenza Group on Modelling (Spi-M), told BBC Radio 4’s Today programme: “We are seeing the R number is greater than 1 everywhere. And, in a sense, some kind of national lockdown, a circuit-breaker or something along those lines, would actually have more effect in those parts of the country that have not yet progressed into Tier 2.

“R is greater than 1 everywhere and if we don’t take urgent action we’re most likely to see that as we’re approaching the festive period we’re probably going to be at least in Tier 2 pretty much everywhere in the country.

“So really we need to move away from these regional firefighting techniques to try to move to something more national.”

Steven Riley, professor of infectious disease dynamics at Imperial College London, said the data from the React study suggests “we need to think about changing the approach”.

Asked if this meant tightening local lockdowns or national restrictions, he told BBC Radio 4’s Today programme: “I think what our study shows is there would be genuine benefits to some kind of national policy.

“If we’re going to end up using those restrictions that have been brought in elsewhere in Europe today and yesterday… we should think about timing. And sooner is better than later for these.

Miriam Deakin, director of policy and strategy at NHS Providers, said: “Given the rising rates of infection and growing pressures on bed occupancy, we would urge the Government to take a cautious and pre-emptive approach which means being tougher and quicker in its response.

“We don’t have enough information to say whether it’s time to move to a national lockdown, and we completely recognise the gravity and impact of such a decision.

“However, to ensure the NHS is able to maintain high quality care for patients, Covid and non-Covid, politicians must be ready to make tough decisions early rather than late.”

In Scotland, First Minister Nicola Sturgeon is preparing to reveal how a new five-tier system of restrictions will apply across the country.

Decisions on which levels will apply to each region will be announced on Thursday.