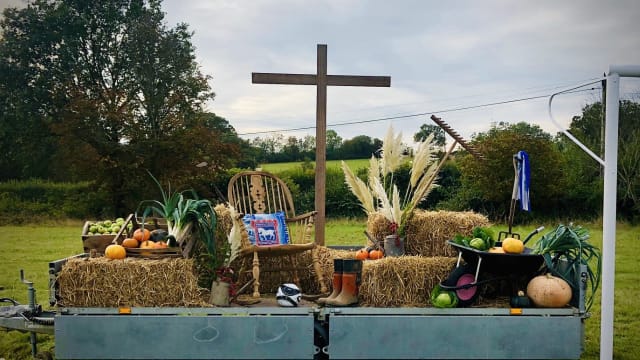 A farmer planned his own drive-in funeral on a sports field where he played football as a young man.

Peter Cole, 80, died suddenly at home in Sibton in Suffolk on September 20 after suffering a heart attack.

Mr Cole, who was active in his local church, had spent much of lockdown calling for outdoor services so people could be together and helped organise the village’s first the week before he died.

His daughter-in-law Michele Cole said: “After we helped him run the church service he just said to us ‘you know what to do now. If I die you can run a funeral on the field’.

“Unfortunately he died the following weekend.”

More than 100 people in 60 cars attended the drive-in service on October 12 on Peasenhall and Sibton playing field where Mr Cole used to play as goalkeeper for Peasenhall United.

The hearse was parked in front of the goal in line with his wishes.

Before he died Mr Cole arranged for the musician Eg White to perform at the service, for a song called Beyond The Sunset to be played and for a minister from Lowestoft to lead the service.

Friends volunteered as stewards to direct cars to park at a safe distance from each other, and the service was played through individual Bluetooth speakers in each car with the help of a drive-in cinema company.

Mrs Cole said she ruled out using FM radio as it “hadn’t worked particularly well” in their church services. “A lot of people in the congregation couldn’t retune their radios and the signal wasn’t very strong,” she said.

She said the drive-in cinema company “did think it was a hoax when we first got in touch” to ask for help.

“Nobody had spoken about running drive-in funerals before,” she said. “But when they realised we were serious they were great.”

Father-of-five Mr Cole, who had 10 grandchildren, lived in either Sibton or Peasenhall his whole life and was caretaker of the chapel used by the two neighbouring villages.

The chapel was closed during lockdown and Mr Cole pressed for outdoor services because many older people in the village were unable to access online church services.

“Throughout the summer we’d been talking with him about this church service because that’s really what he wanted to do, for the people who are very lonely,” Mrs Cole said.

“It’s quite a rural area and they had nowhere that they could go because the church was closed.”

She said Mr Cole’s garden was near to the field where the funeral was held and he spent summer thinking of how he could use it for a church service.

She said he had also seen people in the locality who had died and had “very small funerals and there were people who were really struggling with that”. So he came up with the idea for a drive-in funeral so people could be together.

His parents had also been “very community-spirited”, Mrs Cole said.

“Lots of things around the village happened because they made it happen,” she said.

“Peter used to say that his father had said: ‘Always look after the people in the village’.

“He had that in the back of his mind for a lot of the time as well as making sure that his family were ok.

“Those were the things that drove him forward.”