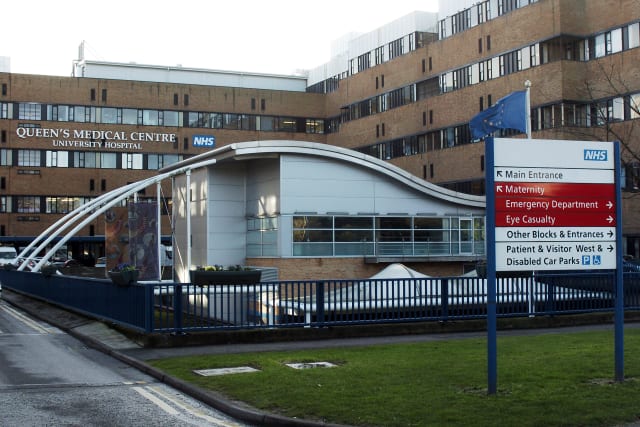 Nottingham hospital bosses have cancelled some cancer operations due to “pressure on intensive care units”.

The city and neighbouring boroughs had been preparing for Tier 3 restrictions to come into force on Thursday – and a surge in cases has meant the rest of Nottinghamshire looks set to follow.

The head of the NHS trust, which runs Nottingham’s two main hospitals, previously said some non-urgent surgery and appointments would have to be cancelled because of a spike in Covid-19 admissions.

It is understood the trust has not implemented a blanket cancellation of cancer operations.

Confirming the cancellation of some operations, Dr Girling said: “We’ve had to make the extremely difficult decision to postpone operations for four of our cancer/pre-cancer patients this week due to pressure on our intensive care units from both Covid-19 and non-Covid related emergencies.

“We expect to treat one of the postponed patients next week, and we’re in contact with the others to arrange a new date, which will be imminent.

“This delay, however short, will be incredibly hard for the patients and their families, and I’m truly sorry for any distress this will have caused.

“We are working closely with partners, and from next week we will be increasing our work with the independent sector to ensure we can continue to carry out urgent and cancer operations.”

It is understood more than 11,000 frontline staff at the trust have been tested for Covid over the past two weeks.

Dr Girling added: “In this phase of Covid we have seen an increase in the number of staff and patients who are positive for coronavirus and not displaying symptoms but who are able pass it on to others who may then become seriously ill.

“We’re doing all we can to stop the spread in our hospitals, including testing all of our frontline staff, planned patients and everyone admitted as an emergency.

“We need our community to work with us to help decrease the spread by adhering to Government guidance – wearing a face mask over your nose and mouth, washing your hands regularly and keeping a distance of two metres from others.”

It is also understood the trust is testing elective patients ahead of admission as well as inpatients regularly –  with 6,000 having been tested so far.

Nottingham South MP Lilian Greenwood said the full announcement of Tier 3 restrictions in the city, which was expected on Tuesday, has been delayed because ministers want to extend the restrictions further afield.

In a series of tweets on Tuesday evening, the Labour MP said: “Yesterday we were told that we’re going into Tier 3 on Thursday.

“24 hours later and the public still don’t know what that means, businesses are unable to plan, people don’t know whether they’ll be going into work on Thursday.

“The Government still haven’t provided the public with the information that explains why extra restrictions are needed or what those restrictions will be. Public trust is being undermined by their woeful communications.

“Now we hear the announcement has been delayed because ministers want to extend Tier 3 to all of Nottinghamshire – as I & others have been saying for days.

“Once again this Government are dithering and delaying – and our constituents, our hospitals and local businesses in our city are paying the price.”

Nottingham City Council leader David Mellen described the delay as “unacceptable”, adding: “This is not good enough for our city.”

The city will join Warrington as well as the Liverpool City Region, Greater Manchester, Lancashire and South Yorkshire in having fresh restrictions imposed in Tier 3.

The finer details of the measures are now expected to be outlined on Wednesday.

In a joint statement also issued on Tuesday, Nottinghamshire County Council, Nottingham City Council and the borough councils involved in the initial Tier 3 announcement said: “We appreciate that our communities and businesses are awaiting clarity and certainty about how the Tier 3 measures will impact on them.

“We await confirmation from Government about their progress in drafting the necessary legislation for Nottingham, Broxtowe, Gedling and Rushcliffe. At the earliest opportunity, we will publish details of the measures and package of support.”

It is understood councils have managed to convince ministers to allow gyms, cinemas, theatres, hair salons and barber shops to remain open, during a week of intensive negotiations over specific controls for the area.