Alex Salmond calls for probe into Nicola Sturgeon to be expanded 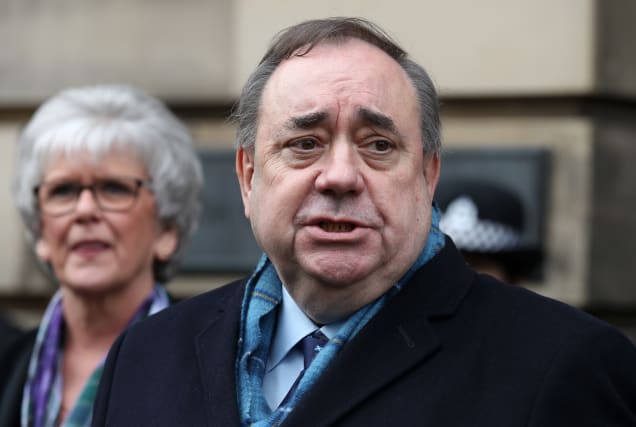 Alex Salmond has called for an investigation into Nicola Sturgeon’s conduct on complaints against him to be widened.

Mr Salmond was the subject of an inquiry by civil servants after allegations of sexual misconduct were made against him, and that probe was later deemed to be unlawful by a judicial review.

Following the end of that legal action, First Minister Ms Sturgeon referred herself to independent advisers on the ministerial code.

A remit set out by Deputy First Minister John Swinney earlier this year said Ms Sturgeon’s role, if any, in the investigation into Mr Salmond would be scrutinised.

However in a letter earlier this month to James Hamilton, the adviser leading the inquiry into the First Minister, Mr Salmond called for that remit to be widened.

He asked Mr Hamilton if “equal status” will be given to investigating if the First Minister misled Parliament, if she failed to act on legal advice, and if civil servants did not give truthful information to Parliament.

Former first minister Mr Salmond, who was cleared of 13 charges of sexual assault, including attempted rape, at the High Court in Edinburgh in March, said the current remit could be a “straw man to knock down”.

Earlier this month, Alex Cole-Hamilton – a Lib Dem MSP and a member of the Holyrood committee which is also looking into the handling of complaints against Mr Salmond – also called for Mr Hamilton’s inquiry to investigate if Ms Sturgeon misled Parliament.

The push stemmed from a meeting Ms Sturgeon had with Mr Salmond’s former chief of staff Geoff Aberdein on March 29 2018, where she was told of allegations against her predecessor.

The First Minister has informed Parliament she did not know of the allegations until four days later when she was told by Mr Salmond himself about the complaints during a meeting in her home.

Ms Sturgeon said she had forgotten the contents of her discussion with Mr Aberdein and it was her meeting with Mr Salmond which was “seared on her memory”.

Mr Cole-Hamilton has said that if the First Minister is found to have misled Parliament, she should resign.