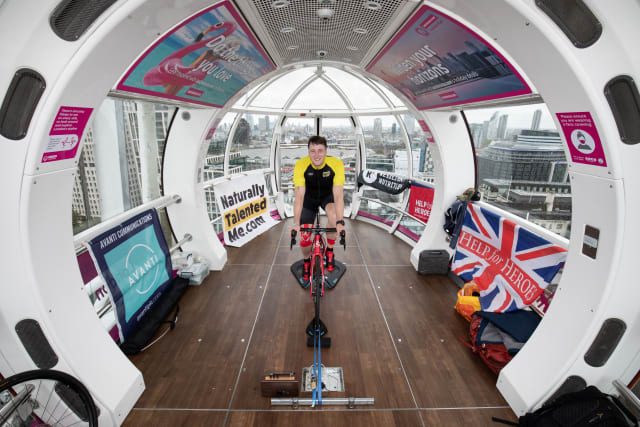 An Army veteran is ending his gruelling 10-day triathlon challenge by cycling and running inside a pod on the London Eye.

Former soldier Darren Hardy, 35, who served in the British Army for 15 years, took on the feat in order to raise funds for the Help For Heroes charity.

He started his “10 x 10 x 10” challenge on October 18, planning to complete 10 Ironman-distance triathlons across 10 days in 10 different locations across the UK.

But in the past 10 days he has suffered from severe acute tendonitis in his left ankle, forcing him to revise his goal down.

Once the final leg is complete, Mr Hardy will have succeeded in doing the equivalent of six Ironman-distance triathlons across 10 days – swimming 14.4 miles, cycling 672 miles and running 157.2 miles in 240 hours.

After beginning the final day by swimming in the Serpentine on Tuesday, Mr Hardy, from Fleet in Hampshire, set out to cycle on a turbo bike and run on a treadmill from a London Eye pod.

He is due to achieve two endurance records as the challenge wraps up – the longest endurance event in the London Eye and the highest endurance cycle in London, having previously taken on 112 miles from The Shard at 800ft.

Mr Hardy’s military career ended three years ago after suffering physical and mental injuries during the Iraq War. He was subsequently diagnosed with PTSD and suffers from a permanent shoulder injury.

“Doing this challenge in the cold and during a pandemic has made it incredibly difficult in every way and I’ve pushed my body far beyond what I expected,” he said.

“Yet with all the people around me and supporting me – we’ve made it happen. I hope that I can show other wounded veterans that there is life and true purpose after injury.

“Death will never threaten you once you find your purpose – and for me that’s why I push my body to extremes.”