Sturgeon: Toughest Covid measures will only be used if absolutely necessary 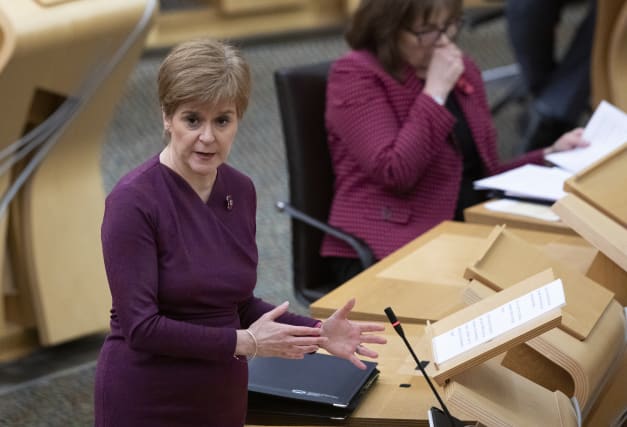 Nicola Sturgeon has conceded it will not be easy to reduce coronavirus across Scotland to the levels required for people to face more minimal restrictions.

Speaking as Holyrood debated plans to bring in a five-tier system of restrictions, Ms Sturgeon confirmed ministers were considering imposing the very toughest measures on the North and South Lanarkshire council areas.

The First Minister said the Highlands Council area, as well as Orkney, Shetland, the Western Isles and Moray, could go straight into Level 1 – the second lowest tier in the new plan.

While this could allow people to meet in other’s homes again – six people from two households are permitted to meet indoors in level one areas –  Ms Sturgeon said the restriction on indoor gatherings would remain in place “for a period as an extra precaution” as Scotland transitions to the new system from November 2.

Meanwhile, in Levels 0 and 1, pubs and restaurants could operate more normally, though in Level 1 a 10.30pm curfew would be imposed.

In Level 3  – the level most of central Scotland and Dundee could be placed into – bars and restaurants are not permitted to sell alcohol either indoors or outside, and must close by 6pm.

In Level 4 such premises would be closed, along with non-essential stores, visitor attractions, gyms, libraries and hairdressers.

Level 4 restrictions will only be imposed if “absolutely necessary as a short, sharp intervention to address extremely high transmission rates,” Ms Sturgeon pledged.

The Scottish Government will set up a new postcode checker so people can check what levels of restrictions are in place in their area.

Apart from Dundee, and the areas that could be placed straight into Level 1, most other areas can expect to go into Level 2, Ms Sturgeon indicated.

Here, they would still be barred from socialising in other people’s homes and pubs and restaurants can only sell alcohol indoors with a main meal with an 8pm closing time.

The First Minister said: “For all of Scotland our aim is to get to Level 1 and then to Level 0 of the framework as quickly as it is possible to do.

“We know it is possible because over the summer we got to the very low levels of transmission that would be needed for that.

“If we can do that once we can do it again, but it will not be easy.”

She urged Scots to “dig in”, saying this could allow people to enjoy some more normality over the festive period.

Speaking about the restrictions, the First Minister said: “It is difficult and frustrating, and getting more so by the day, especially as we head towards Christmas.

“If we dig in now and get Covid under more control, we perhaps open the door not to 100% normality by Christmas, but hopefully more than we have right now. We all want to see that.”

The debate at Holyrood took place after Scotland recorded another 25 deaths from coronavirus and 1,327 positive tests in the past 24 hours.

Ms Sturgeon said: “As we migrate initially to this new system, we will be deliberately cautious.

“We are seeing signs of progress but the situation is fragile and could go in the wrong direction, so we must take care.”

However, she hoped that “over the next couple of weeks, if progress in slowing the rate of new cases continues” local authorities would be able to move down the new tier system.