Nottingham urged to show ‘resilience’ ahead of new Tier 3 measures 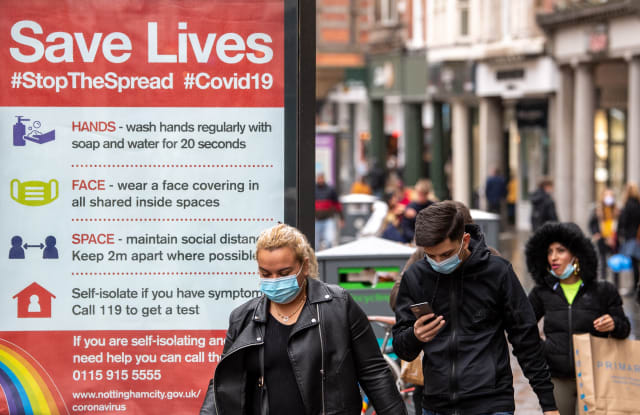 Residents in Nottingham and surrounding boroughs have been urged to keep showing “resilience” ahead of new Tier 3 controls coming into force.

Tougher Covid-19 rules for Nottingham city and the Broxtowe, Gedling and Rushcliffe borough council areas will come into force on Thursday, with finer details of the measures expected to be outlined later on Tuesday.

Nottingham will join Warrington as well as the Liverpool City Region, Greater Manchester, Lancashire and South Yorkshire in having fresh restrictions imposed in Tier 3.

Rushcliffe Borough Council leader Simon Robinson told the PA news agency he believes the measures are supported by a “majority” of residents.

He said people are showing “a lot of resilience, because people understand we need to get on top of the virus”.

Detailed control measures for areas like the hospitality industry are expected to be announced by the Government some time after 5pm, he added, following days of negotiations with councils.

Mr Robinson said: “The restrictions are currently being detailed now with Government.

“It’s very complex, there’s a huge amount of work to be done.

“Then there will be an announcement this evening – I’m not quite sure how that will be done because Parliament is in recess.

“The restrictions will come in, effectively on Thursday.”

On any specific measures, he added: “We’ve taken the generic set of measures that they have for Tier 3.

“More specifically (those measures) are around things like hospitality, retail, serving of alcohol, for instance and those are specific ones we’ve been negotiating with Government.”

Mr Robinson explained an economic package is in “two sides”, with more money for councils’ enforcement teams to make sure people follow the rules and grants for affected businesses.

“Our offices are working right now to make sure we can get that money out there as quickly as possible to the businesses that will desperately need it once restrictions are announced,” he said.

The announcement of south Nottinghamshire’s measures also promised a review after 28 days, with Mr Robinson saying that will be a regular process.

He said: “We’ll all be analysing that data to see what impact the restrictions are actually having.

“We do need to see it come down, not plateau. Plateau won’t be good enough.

“We’ve got to actually see these infection rates coming down, particularly in the over-60s.”

He added: “We’re confident the restrictions are going to make a difference but we do need people to really comply and make sure they do adhere to the new restrictions that are coming out.”

Although people are resilient, Mr Robinson said residents are “weary”.

“It’s getting dark outside, it’s winter, there’s more restrictions, and particularly business owners are really wary of this period coming up in terms of what effect it’s going to have on there,” he said.

“What I’ve seen consistently is that people understand that we have to get a grip on this virus.

“Not just the virus itself but also the effect it’s having on our hospitals.”

Last week, the head of the NHS trust which runs Nottingham’s two main hospitals said some non-urgent surgery and appointments would have to be cancelled because of a spike in Covid-19 admissions.

Mr Robinson said: “When there are hundreds of people in hospitals with Covid – we’ve seen ICU beds usage increasing – people really understand that and it becomes very real and that’s where people are very fearful.”

He added there are “huge concerns about the capacity of the hospitals” when new infections “could mean a hospital admission in three weeks’ time”.

“That’s why it’s so important we get on the infection rate, right now,” he said.

“I am confident, if we get on top of these restrictions, get compliance from business from our residents, we are going to see the infection rate coming down and going in the right direction.

“If that is the case, I am sure we’ll get the support from Government to actually start to reduce these restrictions and give people that freedom and get some enjoyment out of Christmas.”

Visitors to Nottingham city centre have been reacting to the announcement of the tough new measures, with one calling them “necessary”.

Carl Bellamy, who is retired, said he believes the measures will be effective if people obey the rules.

On the possibility of a four-week review of the measures, he said: “The hard-stop date to review it is quite right.

“Statistically, you have to have that amount of time to show any real result don’t you?

“But I think to review it after a month is quite right.”

Another Nottingham resident Carl Green, said: “I think it is something we’ve got to do, isn’t it, really?

“If we all pull together we can go a long way, if you all pull in different directions, you won’t go anywhere.”

He said: “Even if we have this Tier 3 for 28 days, the R-rate might come down a fraction maybe but what’s going to happen after 28 days?

“It’ll come back up again.”