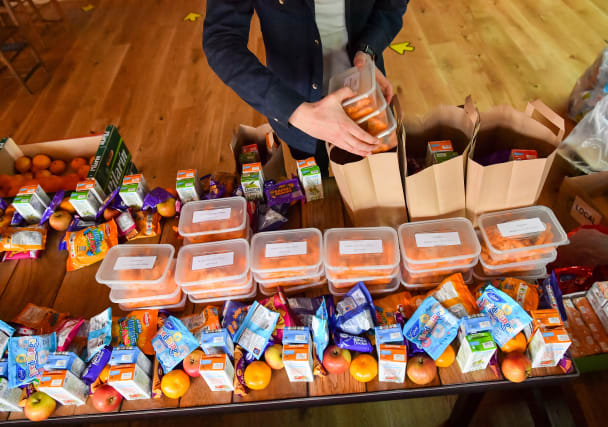 Ministers are examining how holiday clubs could be used to feed hungry youngsters in England in an effort to solve the free school meals row.

The Holiday Activity and Food Programme is the brainchild of Henry Dimbleby, the Government’s food tsar and co-founder of the Leon restaurant chain, and was trialled across 17 local authorities over the summer.

Ministers said they were examining the pilot schemes to see what lessons could be learned and Boris Johnson is reported to be considering giving extra funds to councils to set up the clubs.

Business Minister Nadhim Zahawi told Sky News: “These are incredibly important pilots and we will look at how we can learn from those and how we can build on this.

“The best way to do it – as the Prime Minister quite rightly outlined – is through local government. 17 local authorities participated in that pilot and of course through the actual welfare system, the Universal Credit system,  delivering that additional help for those families.”

The minister said that for some parents “more important than the food to them was the activities” available at the clubs.

The Government is facing mounting public anger at its refusal to extend free school meals into half-term and beyond following a campaign spearheaded by England footballer Marcus Rashford.

The Manchester United star has backed some of the recommendations made by Mr Dimbleby, who leads the National Food Strategy and has called for the extension of the Holiday Activity and Food Programme across England.

Mr Dimbleby told BBC Radio 4’s Today programme: “This problem is real. It should go without saying it’s serious. It’s immediate and it’s going to get worse as employment gets worse and the Government isn’t doing enough.

“One in seven families already are reporting not being able to afford enough food.”

He said that “in-kind support” through holiday clubs, providing food and education, had been shown to have a better impact than putting the same “small amount of money” into Universal Credit.

“I haven’t been backward in coming forward with ideas that I have been feeding in to Treasury, to (the Department for) Education and to Number 10, ideas of how they could rapidly implement this by Christmas,” he said.

“But … the dark centre of government is invisible to me and I have no idea exactly what they’re working on as we speak.”

A petition started by Rashford for free meals to be extended in England over the school holidays was nearing one million signatures on Tuesday morning.

Businesses, community groups and councils – including Tory-run administrations – have answered his call and provided thousands of free meals for children as schools in large parts of England began their half term break.

Schools are already preparing for the longer Christmas holidays without knowing what – if anything – the Government plans to do to help.

Steve Chalke, chief executive of Oasis Community Learning, which has 53 schools across England, said the trust is “stepping up” plans to help pupils over the festive period as a result of the pandemic.

Mr Chalke told the PA news agency: “We realise that this Christmas is going to be dreadful. You’re going to get half the country feasting and the other half with nothing.

“And the number of children in our schools who are now designated as vulnerable has grown by 43%, since the beginning of Covid.”

Rashford has used his social media profile to highlight examples of businesses that have pledged to help with meals for local children.

Writing on Twitter on Monday evening, he called for businesses to let him know how many meals they had supplied on the first day of half-term.

Rashford’s post was quickly flooded with responses, with people, restaurants and community groups sharing their stories.