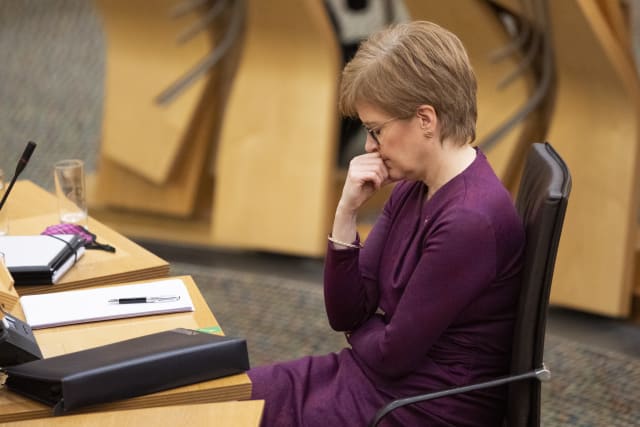 Hospitality businesses in parts of Scotland could remain closed until after Christmas, industry leaders have claimed, as First Minister Nicola Sturgeon confirmed plans for a new five-tier system of coronavirus restrictions.

Speaking after the Scottish Parliament backed a Government motion on the new system, the Scottish Tourism Alliance warned businesses in areas placed under the toughest restrictions in Level 3 or Level 4 could even have to shut permanently.

Much of central Scotland, including Edinburgh and Glasgow, as well as Dundee, could be placed straight into Level 3 when the tiers are introduced from Monday November 2.

Meanwhile both the north and south Lanarkshire areas could be in Level 4, Ms Sturgeon indicated – although she said this would only happen if “absolutely necessary”.

In Level 3 bars and restaurants are not permitted to sell alcohol either indoors or outside, and must close by 6pm.

Meanwhile in Level 4 such premises would be closed, along with non-essential stores, visitor attractions, gyms, libraries and hairdressers.

The Scottish Government has pledged to bring in a postcode checker, so people can be sure what restrictions are in place in their local authority area.

But Marc Crothall, chief executive of the Scottish Tourism Alliance, said the hospitality restrictions would “without a shadow of a doubt create a wave of trauma and mental anguish across the sector”.

He added that “many hundreds of businesses who will fall into Tier 3 or 4” were now “likely to stay closed beyond Christmas, or indeed permanently” – with this leaving their staff at risk of unemployment.

Calling for more help for the sector, he said: “The gap between the funding that is available and the costs of overheads and maintaining staff levels has become too great, and I would expect imminent announcements of redundancies on a worrying scale, particularly for any businesses placed in Tier 3 or 4.”

Mr Crothall continued: “Without a robust package of support, our hospitality and tourism sectors are facing the bleakest of winters with very little hope of recovery beyond the beginning of 2021.”

His comments came after Ms Sturgeon outlined her ambition for all of Scotland to get to Level 1 – and then Level 0 – “as quickly as it is possible to do”.

The First Minister said: “We know it is possible because over the summer we got to the very low levels of transmission that would be needed for that.

“If we can do that once we can do it again, but it will not be easy.”

The Highlands Council area, as well as Orkney, Shetland, the Western Isles and Moray, could all go straight into Level 1 – the second lowest tier – in the new plan, Ms Sturgeon indicated.

And while being in Level 1 could allow people to meet in other’s homes again – six people from two households are permitted to meet indoors in such areas –  the First Minister said the restriction on indoor gatherings would remain in place “for a period as an extra precaution” as Scotland transitions to the new system.

She urged Scots to “dig in”, saying this could allow people to enjoy some more normality over the festive period.

Speaking about the restrictions, the First Minister said: “It is difficult and frustrating, and getting moreso by the day, especially as we head towards Christmas.

“If we dig in now and get Covid under more control, we perhaps open the door not to 100% normality by Christmas, but hopefully more than we have right now. We all want to see that.”

The debate at Holyrood took place after Scotland recorded another 25 deaths from coronavirus and 1,327 positive tests in the past 24 hours.

Ms Sturgeon said: “As we migrate initially to this new system, we will be deliberately cautious.

“We are seeing signs of progress but the situation is fragile and could go in the wrong direction, so we must take care.”

However, she hoped that “over the next couple of weeks, if progress in slowing the rate of new cases continues” local authorities would be able to move down the new tier system.

Scottish Conservative Holyrood leader Ruth Davidson urged the Government to look at allowing increased socialising for families on Christmas and Boxing Day to “support those who otherwise would be condemned to a very bleak December”.

Scottish Greens MSP Alison Johnstone called for more asymptomatic testing, saying: “We know that those carrying Covid-19 can be asymptomatic while contagious and we can’t continue to wait for people to show symptoms before we test them.”

Meanwhile, Scottish Liberal Democrat leader Willie Rennie asked for more detail about how areas will be able to move down tiers, saying: “We need to have some clarity, some hope for people that the best-case scenario in the strategy – which is still pretty restrictive – has actually got a potential route to get there.”