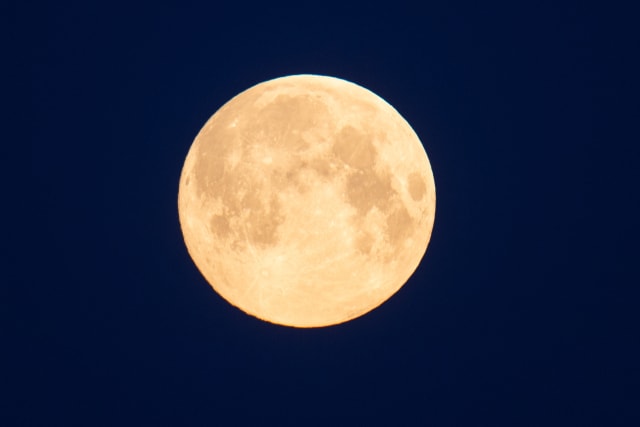 There is water on the sunlit surface of the Moon, Nasa has announced.

The discovery suggests water may be distributed across the lunar surface, and not just limited to cold, shadowed areas.

Nasa's Stratospheric Observatory for Infrared Astronomy (Sofia) has detected water molecules (H2O) in a crater located on the Moon's southern hemisphere. The crater is so large that it is visible from Earth.

Previous observations of the Moon's surface detected some form of hydrogen, but were unable to distinguish whether it was water or its close chemical relative, hydroxyl (OH).

The researchers found water in concentrations of 100 to 412 parts per million – roughly equivalent to a 12-ounce bottle of water – trapped in a cubic metre of soil spread across the lunar surface.

As a comparison, the Sahara desert has 100 times the amount of water than what Sofia detected in the lunar soil.

Paul Hertz, director of the astrophysics division in the science mission directorate at Nasa Headquarters in Washington, said: "We had indications that H2O – the familiar water we know – might be present on the sunlit side of the Moon.

"Now we know it is there.

"This discovery challenges our understanding of the lunar surface and raises intriguing questions about resources relevant for deep space exploration." Though it is still unclear how easy to access the water will be.

Nasa says that despite the small amounts, the discovery raises new questions about how water is created and how it persists on the harsh, airless lunar surface.

Under Nasa's Artemis programme, the agency is eager to learn all it can about the presence of water on the Moon in advance of sending the first woman and next man to the lunar surface by 2024 and establishing a sustainable human presence there by the end of the decade.

Casey Honniball, the lead author who published the results from her graduate thesis work at the University of Hawaii at Manoa in Honolulu, said: "Prior to the Sofia observations, we knew there was some kind of hydration.

"But we didn't know how much, if any, was actually water molecules – like we drink every day – or something more like drain cleaner."

Sofia offered a new means of looking at the Moon.

Flying at altitudes of up to 45,000 feet, Sofia – a modified Boeing 747SP jetliner – was able to train its a 106-inch diameter telescope on the Moon.

Using its Faint Object Infrared Camera for the Sofia Telescope (Forcast), it was able to pick up the specific wavelength unique to water molecules, at 6.1 microns, and discovered a surprising concentration in sunny Clavius Crater.

Dr Honniball added: "Without a thick atmosphere, water on the sunlit lunar surface should just be lost to space.

"Yet somehow we're seeing it. Something is generating the water, and something must be trapping it there."

The experts say several forces could be at play in the delivery or creation of this water.

Another possibility is there could be a two-step process whereby the Sun's solar wind delivers hydrogen to the lunar surface and causes a chemical reaction with oxygen-bearing minerals in the soil to create hydroxyl.

Meanwhile, radiation from the bombardment of micrometeorites could be transforming that hydroxyl into water, Nasa said.

It added that the water could be trapped into tiny bead-like structures in the soil that form out of the high heat created by micrometeorite impacts.

Another possibility is that it could be hidden between grains of lunar soil and sheltered from the sunlight – potentially making it a bit more accessible than water trapped in bead -like structures.

Libby Jackson, UK Space Agency human exploration programme manager, said: "The discovery that the Moon harbours water reshaped what we know of our closest celestial neighbour and today's announcement could take our understanding to a new level.

"Using a small amount of the Moon's natural resources could make it easier for astronauts to explore the Moon and the hope is that these pockets could be used to create drinking water and rocket fuel on the lunar surface."